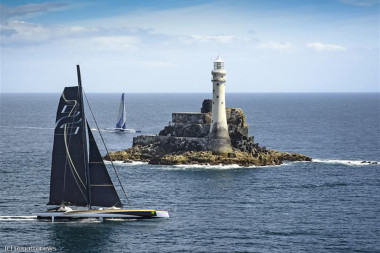 Cadiz – Spindrift 2, the world’s largest racing trimaran, and its 14-strong crew, led by Dona Bertarelli and Yann Guichard, can at last foresee a weather window within the next 24 hours which could launch their attempt to beat the record set between Cadiz and San Salvador (Bahamas). Spindrift 2 has been on standby in Portimao, southern Portugal, since 7 October, waiting to attack the record set by the maxi trimaran Groupama in 2007. The large black and white trimaran is hoping to cross the start line in the bay of Cadiz on Tuesday 29 October around 12:00 GMT.

The three weeks enforced “standby” in Portimao was partly because of the significant collapse of the Azores high-pressure system and the continuous chain of active low-pressure systems hitting the western coast of the Iberian Peninsula. The high pressure is finally gathering strength and generating sustained North-Easterly winds ideal for the first stage of the crossing towards the Canary Islands. “This means the trade winds are picking up again,” explains Richard Silvani from Météo France, weather analysis and routing partner to Spindrift 2 on her first great transatlantic challenge. “The Azores high pressure system is moving into the ideal position for Spindrift 2,” he says.

Dona and Yann will therefore be able to make the most of this opportunity to start and will continue to refine the exact time to set off across the virtual start line from Cadiz. “The window that is being presented is pretty good with a sustained trade winds for the most part of the course,” explains Silvani. “At the start they will have to get away from the Spanish coastline and any areas of no wind to get the most out of the northern breeze, which should fluctuate between 25 to 30 knots.” Outlining the options, Guichard added; “The first part up to the Canaries will be quite fast, with a steady breeze and a number of gybes. The storms that have been sweeping across the Atlantic for the last few weeks have generated a North, North-West sea swell that is not good for fast sailing and we expect to have 4-metre waves. Once we have rounded the Canary Islands by the right it will be a matter of fine tuning our strategy and choosing the best possible course to join San Salvador. The options are a more northerly course, closer to the direct route, or a more southerly course, further off the direct course but presenting better conditions.”

As always on long course record attempts, there is a certain amount of uncertainty with any forecasts beyond five days and the finish area in San Salvador is currently under the influence of low pressure, sitting between two systems where there is very light wind.

Once the stopwatch starts, the whole Spindrift 2 crew will be totally focussed on its first race against the clock on what looks like being a fast sail. “The pressure will be intense from beginning to end and we are going to have to keep the pace going throughout the crossing,” says Dona Bertarelli. “We do not have much margin to play with.”

Route of Discovery, Spindrift 2 in standby a Portimao