discovery route17 sailing3991 spindrift 227 yann guichard23
Having reached the island of Gran Canaria yesterday at 6pm - a required point of passage to be left to starboard - the Maxi... 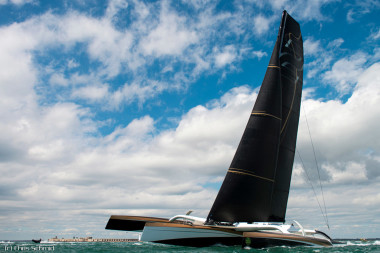 Gran Canaria – Having reached the island of Gran Canaria yesterday at 6pm – a required point of passage to be left to starboard – the Maxi Trimaran 2 Spindrift now races along the tadewind highway, with a strong northeasterly wind to propel them across the West Atlantic. Dona Bertarelli, Yann Guichard and their crew of 12 are swallowing up the miles. A second day of good results and high speeds follows the first 24 hours of rough seas and three highly strategic gybes that produced a 642 miles day. With a good VMG, velocity made good, and average speeds of over 30 knots, Spindrift 2 has covered over a third of the course, 2,880 miles in just 48 hours.

Spindrift 2’s theoretical advance on the current record holder of the Discovery Route (Franck Cammas and Groupama 3 in 2007) continues to stretch (232 miles this morning) under the combined effect of greater speed and a more direct route than that chosen by Groupama 3. According to estimates looked at before the start by Spindrift 2’s skippers and crew, assisted by weather router ashore Richard Silvani, the first two days in the Atlantic are conducive to the highest performance and a substantial gain on the record, with the trade winds slightly unstable in direction, but still blowing strong at over 25 knots.

“We are well set up for two days of fast starboard tack sailing,” confirms Yann Guichard. “We could have a few gybes to reposition ourselves to not get too close to the heart of the depression and keep the right trade wind angle. The passage at the Canaries went well and without incidents despite the windless patches we had at times went it dropped from 27/28 knots to 7/8. We were able to do an arc on our course to the south of the islands to avoid having to gybe. This saved us having to do a gybe and manoeuvring in rough seas, a delicate operation on the world’s largest trimaran and especially in high winds.”

“The sea condition is today once again the factor limiting our speed, although we are racing well. Something that is rare to do on Spindrift 2, is to ballast and yesterday we decided to do this, not so much to avoid diving but more to try and have smoother sailing”, explains Yann. “The entire crew has wholeheartedly embraced the pace of the record and ocean life. All eyes are permanently on both crew and equipment. We try to make as few demands as possible on the material“, says Yann, “especially the sails and rigging. It is all about staying in tune with the elements, to sail fast in the best wind angle when the sea state allows for it and then to slow down when it is a little less favourable.”

Rested, despite the uncomfortable conditions, heat inside the boat and the constant spray on deck, the crew of Spindrift 2 know the hardest part is yet to come. “In 2007 Groupama had a difficult start to the race before a highly charged finish, and we are especially concerned with the transition zones coming up midcourse. We should therefore expect to have to see our speed dropping” warns Guichard.

Message received from the board: Xavier Revil, watch leader
“Good morning. A light rain has settled in over us on Spindrift 2 on our second morning, which is helping to desalinate the faces of the sailors on board. And they really need it after the first 30 hours of racing at high speed with the spray coming off Spindrift 2’s bows. The second night was quite complicated with the passage of Grand Canaria, which we had to leave to starboard before making headway to the Bahamas. The island really affected the wind so we found ourselves having to change sail plan a number of times. We had a busy night on board trying to keep up good average speed. We are now heading to the Caribbean, having not sighted the Canaries due to poor visibility, a pity for they are beautiful mountainous islands … All is going well for the crew on board, who are very focused on their tasks. The watches change every two hours and the damp below decks makes it all that much harder to good rest. A quick look at the speedometer, and we’re still at 35 knots, moving fast, so all is well! Have a good day and see you soon.”

At 14:30hrs GMT this afternoon Spindrift has a 252.79 miles lead on the current record time.