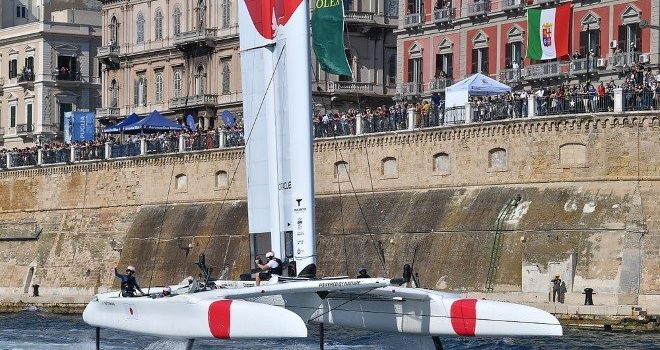 sail gp4 sailing3991
Racing for the first time with the brand new 29M wings, designed for the light breeze, the Great Britain SailGP Team had an explosive...

Saint-Tropez – Racing for the first time with the brand new 29M wings, designed for the light breeze, the Great Britain SailGP Team had an explosive day on the water at the France Sail Grand Prix in Saint-Tropez.

GBR made a strong start to the day with a third place in race four, after recovering from a penalty at the start, giving them a shot at qualifying for the winner-takes-all ‘podium race’. However, that shot did not come as a collision in the pre-start of race five with the Spain SailGP Team, after the British F50 made a bold move attempting to squeeze through a gap that ultimately was not there, resulted in Ben Ainslie’s team finishing their final race of the day in fourth place and out of the podium places.

“We had a reasonable first race today which set us up with a good shot of getting into the top three, but we needed to push in the second race. We had a gap and went for it but unfortunately it closed up right at the last moment between Spain and Denmark and we couldn’t quite feed the boat through. We had a collision with Spain and rightly got the penalty for that. That cost us the race and the shot at getting at the top three.

“That said, I think we’ve learned a lot from this event, sailing the boat in these conditions and using the new 29M wing, which was a great success. Whilst we are frustrated about that final race there are many positives to take away going into Cadiz with the League getting tighter and tighter at the top. It’s very close on the overall Championship leaderboard which is super exciting.”

Race 4 – JPN WIN, GBR 3rd
With the brand new 29M wings proving to be more powerful than expected, and a last-minute gust in the pre-start powering up the F50 fleet, six boats crossed the start line early including the Great Britain SailGP Team with all the penalised boats having to get behind Nicolai Sehested’s Denmark SailGP Team.

That penalty resulted in the Danes building a strong lead, with the British F50 in midfleet. On Leg 3 of the race, however, there was drama as the Danish jib sheet snapped, meaning they would lose a significant amount of power for the remainder of the race.

That gave Ainslie and his crew an opportunity, as they moved past Billy Besson’s home France SailGP Team at the third gate, and quickly took advantage of the lack of Danish power to overtake and finish in third place just behind Pete Burling’s New Zealand SailGP Team in second and Outteridge’s Japan SailGP Team in first.

The third-place finish ensured the British Team remained in the hunt for the ‘winner-takes-all’ podium race.

Race 5 – DEN WIN, GBR 4th
All the drama for the Great Britain SailGP Team came in the pre-start of Race 5. As Ben Ainslie and crew attempted to pull off a late move at the start, knowing a race win would likely be needed, with the British F50 attempting to squeeze through a small gap between the Spanish and Danish F50s. Unfortunately the gap closed and Great Britain’s rudder collided with the Spanish boat, a GBR penalty quickly followed.

After taking the penalty the British team were in seventh place at the first mark. Over the course of the remainder of the light and shifty race the British crew were able to move through the fleet to finish in fourth, meaning they would finish the event in sixth place overall.

The race was won by Sehested’s Denmark SailGP Team as they returned with flying colours after fixing their jib sheet issue. Phil Robertson’s Spain SailGP Team finished in second place, which meant they would qualify for the final podium race alongside Japan and USA SailGP Teams.

Podium Race – JPN WIN
In the final podium race Jimmy Spithill’s USA SailGP Team built a strong lead before falling into an empty pocket of wind which gave Outteridge’s Japan SailGP Team the opportunity to chase the Americans down.

From then on, it was a case of who would judge the wind shifts best and find what little breeze there was to take advantage of the 29M wing’s extra power. In the end, it was Nathan Outteridge and the Japan SailGP Team who took the event win, with Spithill’s USA SailGP Team in second and Spain in third.

SailGP resumes in Cadiz, Spain for the final event of the European leg of the season on 9-10 October 2021.

SailGP, in Taranto the winner is Japan SailGP with Checco Bruni