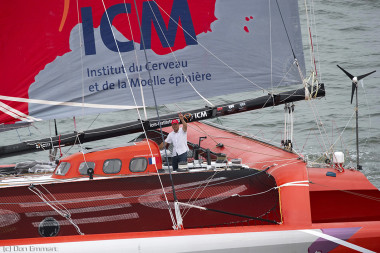 Francis Joyon left Bordeaux on Tuesday 8th April beginning in the Gironde Estuary at 1433hrs UTC. This was merely four days after officially going on stand by with the support in particular of the French football team, the Girondins de Bordeaux and Fabien Barthez among others. This new Friendship Route between Bordeaux and Rio de Janeiro was designed to bring together France and Brazil and come to the aid of charities in Brazil, as well as the ICM, the Brain and Spinal Cord Institute in France.

An average speed of 15.2 knots on the Great Circle Route and 18.1 knots out on the water

IDEC’s race time: 13 days, 03 hours, 05 minutes and 19 seconds to sail the 4812 miles of the theoretical route or 15.27 knots. In reality, IDEC sailed 910 miles more out on the water: 5722 nautical miles at an average speed of 18.16 knots. The explanation: Francis Joyon had to go around all the low-pressure areas from Cape Finisterre to the middle of the Atlantic. He had no hesitation in sailing 900 miles away from the direct route. Once again, Francis Joyon has managed to get the most out of his maxi trimaran to play with the various weather systems. He very often got up to around thirty knots…

The final 24 hours of sailing along the coast of Brazil were very demanding for the skipper of IDEC, who had to sail upwind for the final 120 miles to Rio de Janeiro. Exhausted after missing out on his sleep, Francis Joyon had to keep hard at it, carrying out changes of tack and many manoeuvres to reach the finishing line. These thirteen days of sailing were rather unusual as he had to sail a long way north to get to the west and this demanded a lot of effort. A few moments after crossing the line, Francis Joyon gave us his first impressions of this new record.

What Francis Joyon told us at the finish
His first reaction: “I’m really pleased to have finished, as the final 24 hours were very testing. Physically I’m exhausted. I haven’t slept for two days because of the conditions, but also because there is really a lot of shipping along the coast of Brazil. You have to remain alert all the time. This is a particularly exhausting job.”

The final 24 hours at sea
“The final hurdle was very stressful. Around midnight last night, I found myself in a huge storm, which was quite impressive… and the wind suddenly swung around 180 degrees. I went from downwind sailing to upwind sailing with the wind strength all over the place going from 10 to 25 knots in just a few seconds. Aboard a giant multihull like IDEC, these are challenging conditions. You have to keep manoeuvring, taking in reefs and making changes. And at the same time there is the threat of all the shipping between the coast and the offshore oil rigs. A tug came close to the boat, while I was carrying out manoeuvres for example. And with the wind coming straight at me, everyone knows that neither I nor the boat likes that. That’s why I’m particularly pleased to be here now in Brazil.”

The time and the route
“Before setting off from Bordeaux, I thought it would take around fifteen days. So thirteen days isn’t that bad, taking into account my route off to the west that was necessary to get around the lows in the Atlantic, then the width of the Doldrums (300 miles, editor’s note) where I was slowed down, but never came to a complete standstill. This route was excellent training for the Route du Rhum: when I finally got back on a southerly route in the Atlantic, I was only two days away from Guadeloupe! I sailed a lot of miles, a lot more than indicated on the theoretical route… and I learnt a lot. Each mile sailed, each manoeuvre carried out helps me get to know the boat. My time can of course be improved, if the weather cooperates allowing a more direct route.”

The boat
“I’m really pleased as IDEC has shown that she is still fast and reliable. I didn’t break anything important. The little problems I had along the way were routine incidents and not that important. I’m going to be able to sort them all out by myself here in Brazil. They are only minor details. So there is nothing to worry about on that score.”

For the ICM
“Sailing to support the ICM and for charities is very motivating for me. It adds something spiritual to the mere sport of sailing.”