jules verne trophy20 sailing3991
After analysing the latest weather files this morning, Dona Bertarelli, Yann Guichard and their team confirmed a start from Ushant in the next 24... 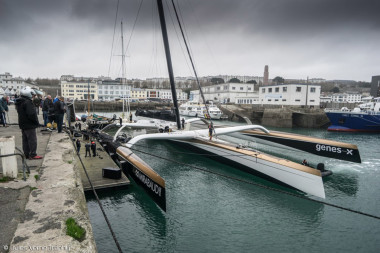 Pointe Bretagne – After analysing the latest weather files this morning, Dona Bertarelli, Yann Guichard and their team confirmed a start from Ushant in the next 24 hours on their round-the-world record attempt for the Jules Verne Trophy (the time to beat: 45 days, 13 hours 42 minutes and 53 seconds). The wind is currently blowing at over 120 km/hour (75mph) at Pointe Bretagne with 5-metre waves. The skipper and the routing experts are now refining when the team will cast off from Brest (Malbert’s quay), but the likelihood is that the trimaran will cross the startline tonight.

Yann Guichard: “This is a good window and we can’t let it pass. We’ve decided to leave Brest in the next few hours with a start on the round-the-world imminent sometime in the night from Saturday to Sunday. The North Atlantic descent will be fast – around five days to the equator. The conditions in the Bay of Biscay and during the first 36 hours will be really difficult. It’s going to make it fast downwind and that’s what we were looking for.”

Dona Bertarelli: “We went to code green after seeing the latest weather file this morning, with a start tonight in tough conditions. We’ll have to look after body and boat. There are still some uncertainties in the South Atlantic, where the weather models differ slightly, but we’re seizing our chance because we can’t ignore a window like this.”