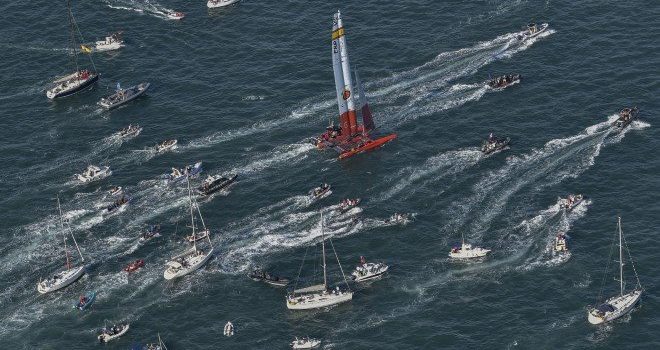 With the largest crowds to attend a SailGP event to-date, the first ever Spain Sail Grand Prix got off to a flying start. In...

Cadice – With the largest crowds to attend a SailGP event to-date, the first ever Spain Sail Grand Prix got off to a flying start. In scenes reminiscent of a football match, fans roared from the shorelines and from the 1,400 boats that turned out to line the race course, delighted to witness their home team win on opening day of the season’s sixth event.

Ahead of the start of racing and adding to the excitement for the home team, His Majesty King Felipe VI visited the team’s base before kitting up and taking to the water to experience first-hand the thrill of the F50.

Spain SailGP Team wing trimmer Florian Trittel said: “For us it’s probably one of the most thrilling moments in our careers as athletes, winning our first race at a SailGP event and doing that in front of the home crowd – it’s definitely been something amazing and a day I will never forget.”

Driver Phil Robertson added: “That was just insane out there. I have never experienced anything like that before. Ever. For the team it was amazing to have so many supporters out there, there was just so much noise going on wherever we were on the race track, it was pretty incredible.”

Donning the 29 meter wings for the forecasted light air conditions, the fleet of eight supercharged F50s took to the Bay of Cádiz with six onboard, which was then reduced to four athletes as the wind dropped throughout the racing window.  Tom Slingsby’s Aussie team finished the day on top of the event leaderboard with Jimmy Spithill’s U.S. team hot on its heels – only a single point separating them. Third position sits with Nicolai Sehested’s Denmark SailGP Team presented by ROCKWOOL, trailing the event leader by four points.

Managing a rollercoaster of a season, and aiming to cast a distant shadow on a dismal last place finish in Saint-Tropez, Slingsby got off to a blazing start – including a photo finish in the opening race with Ben Ainslie’s British team – to kick off the weekend’s races. Now positioned ahead of the fleet going into Sunday – and with favorable weather conditions – Slingsby and his team may be poised for the comeback they’ve been working towards.

Slingsby said: “To sum up today’s racing, it was a happy one to get through. It’s like a minefield out there, we said we don’t want a shocker, it’s a real ‘danger day’. We knew it was going to be light breeze conditions and then we’ve got heavier breeze tomorrow. To come away with three consistent results, we’re stoked. Doesn’t really matter that we’re sitting on top of the leaderboard, we just didn’t want to have a bad result and yeah, we’re happy.

“A huge focus for us heading into today was to have good starts and I think we did that. I was very frustrated to lose positions in both the times we were leading, but we can’t get everything. We’re happy. It’s a good day.”

A momentous day for SailGP also saw the integration of the Women’s Pathway Program athletes to the F50 for racing. For the first time ever, the female athletes raced on board the foiling catamarans, taking on a variety of roles across the fleet including grinding, tactics and communications.

Great Britain SailGP Team athlete Hannah Mills said: “It was amazing. I loved it and the racing was amazing. Yesterday in training we did three practice races and I learned a heap that I could put into the day’s racing as the conditions were really similar.

“I am in the loop with the communications, the tactics and strategy, but it has just been for two days so it is only going to improve and improve as we understand the language and what’s useful. It is a big learning curve but I am loving it.

“I am excited for tomorrow, it looks windy but I have full faith in the team, they are great and I am really looking forward to it. We just need to claw some points back on the top three of the overall standings – so that’s the main focus. We need to place as best we can so we will be all guns blazing tomorrow.”

It was a baptism of fire for the newest driver in the SailGP fleet – Quentin Delapierre – onboard the French team who began his steep learning curve in the F50. Two last place finishes and a seventh, saw the team end the day at the bottom of the leaderboard.

A day of high-speed action is anticipated for the final day of racing on Sunday, October 10, with the final two fleet races determining which trio will meet in a three-boat dog fight for the podium final race and claim victory at the Spain Sail Grand Prix.

Tickets are sold out for the final day of racing but fans can still attend the Race Village at Paseo Santa Bárbara to cheer on the home team. Alternatively, boat owners can take their vessels out to watch the racing and can register via SailGP’s Bring Your Own Boat Program for all the race and course information.

For those unable to attend in person, fans can catch the action via the broadcast across 175 territories, including via RTVE in Spain. Full details can be found at SailGP.com/Watch.