Trofeo Jules Verne, Spindrift 2 is around the world 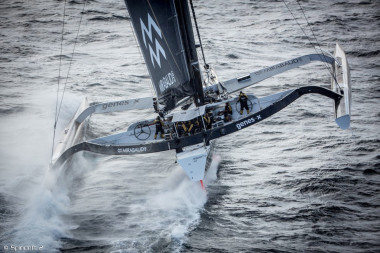 Atlantic Ocean – On Sunday, November 22nd, 2015 at 4:01:58 GMT, the trimaran Spindrift 2, led by Yann Guichard, crossed the start line that runs from Créac’h lighthouse (Ushant island, France) to Lizard Point (England) for the start of her crewed non-stop circumnavigation. The boat crossed the line in a north wind of around 10 knots, under a full mainsail and a solent.

The record attempt by Dona Bertarelli and Yann Guichard and their crew began four years to the day since the current record-holder, Loïck Peyron, began his attempt (see previous news item). Banque Populaire V set that record at an average speed of 19.75 knots (36.58 km/h) for the theoretical shortest route of 21,600 nautical miles, but they actually travelled 28,965 miles, averaging 26.5 knots (49.08 km/h) over the six weeks. The time set in that impressive performance was 45d 13h 42m 53s, a tough time to beat.

Yann Guichard spoke on the radio during the night, just after crossing the line: “We don’t have much wind at the moment – 8 to 10 knots. The sea conditions are not easy because there is a strong current, but the wind will pick up strength, reaching around 30 knots in the Bay of Biscay. So, it’s a steady start at 15-18 knots. We’re delighted to have crossed the line on November 22nd, the same date that Loïck Peyron and his crew started their record, so I hope it’s a good omen for us. Right now, we’re all out on deck, manoeuvring the boat to get away from Ushant island as quickly as possible so we can pick up some stronger, more consistent winds.”

To beat the record, Spindrift 2 must return to Ushant before 17:43:51 GMT on January 6th, 2016, i.e. 1 minute quicker than the previous time, as per the WSSRC rules. Between now and then, the 14 sailors must sail around the world via the three capes (Good Hope, Leeuwin and Horn) on the world’s largest racing trimaran. They will be supported by their onshore router Jean-Yves Bernot, who will operate from his headquarters near La Rochelle (France). Day and night, Jean-Yves will keep a close eye on the boat and on the latest weather updates, which will allow him to work with Yann Guichard and onboard navigator Erwan Israel to identify the best route to follow.

Having also been on stand-by in Brest, Francis Joyon’s trimaran left Ushant for her record attempt in the very early hours of this morning, at 2:02:22 GMT, i.e. 1h 59m 36s before Spindrift 2. The two boats are therefore making their descent of the Atlantic at the same time, and should cross the equator in around five days’ time. The record time across the Equator set by Banque Populaire V was 5d 14h 55m. Over the next few hours, the wind will strengthen to around 30 knots in the Bay of Biscay. Sea conditions should also gradually improve, allowing the crew to dash through the Azores High.