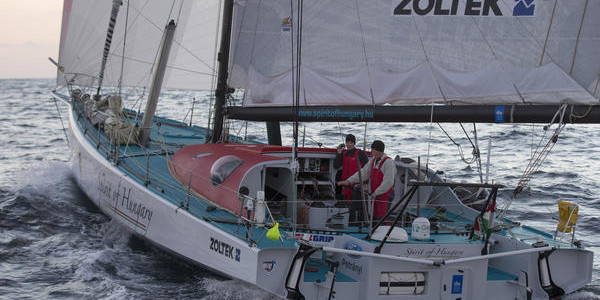 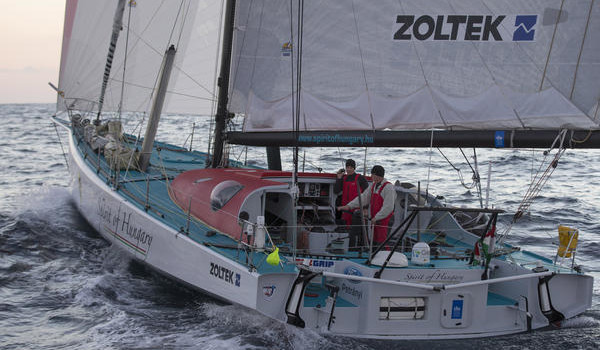 Barcelona World Race73 sailing3991
“In the end, you have to make a decision. We could stay in the range of 10-20 miles with Cheminées Poujoulat, or play the... 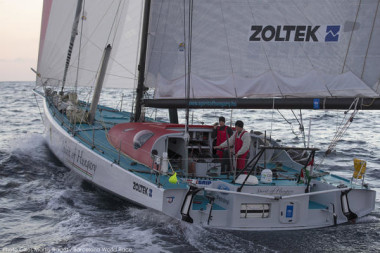 Atlantic Ocean – “In the end, you have to make a decision. We could stay in the range of 10-20 miles with Cheminées Poujoulat, or play the big game,” said Guillermo Altadill today, explaining Neutrogena’s bold split to the south.

From sailing the length of the Atlantic virtually neck and neck, this morning the Barcelona World Race leaders were nearly 400 miles apart, after second-placed Neutrogena split from current leaders Cheminées Poujoulat, gybing south in search of new weather systems and stronger westerly breezes.

This bold tactical move by Guillermo Altadill and Jose Munoz is likely to see the two leading boats diverge further. Speaking earlier today Altadill was confident in his decision and their chances of making a significant gain by the time they reach the Cape of Good Hope in four or five days.

“The thing is we were in a system between the two high pressures, with a very narrow band of wind, heading downwind. And I saw the possibility to change the system and go more south, because the thing with the system that we were in is that you cannot go south – you’d need a shift from the wind to go more south. So I decided to take the risk – well it’s not really a risk – and change the system, take the big low that’s coming from the south side of where we were. And I think then it was safer to take this new system than to stay in the other one, because you’re committed to keep going, only sailing east and not gaining south, so I think it’s a little bit of a gain long-term.”

However, once Neutrogena reaches the Antarctic Exclusion Zone, they may face a punishing series of gybes in ordeimoca 60r to make the necessary miles to the east. They are expected to arrive at the Cape of Good Hope in four to five days.

Taking no prisoners
Along with the bold tactical move, Altadill reported in this morning’s video conference that they were sailing Neutrogena at “110 percent”. Currently their pedal-to-the-metal approach appears to be paying off – this morning Neutrogena was the fastest boat in the fleet, averaging over 20 knots over a 6-hour period and reducing Bernard Stamm and Jean Le Cam’s lead by 30 miles since 0500am, despite the substantial separation between the two boats.

This section of the Atlantic is renowned for record-setting speeds – it was here that Jean-Pierre Dick and Loïck Peyron set a new 24-hour speed record in the Barcelona World Race four years ago, covering 506.35 nautical miles at an average pace of 21.1 knots.

Race meteorologist Marcel van Triest explains that the combination of powerful low pressure systems and strong westerly winds – but moderate waves – makes this South Atlantic zone a sailing fast-lane: “The waves are a consequence of ‘fetch’, which is how many square kilometres or square miles the wind blows, the time it has blown there and the intensity of the wind. If you’re on the leading edge, if you’re in front of one of those big lows, the waves haven’t had time to build up yet and then you’ve got fairly flat water with lots of wind, and that’s where you can beat those 24 hour distance records.”

Third placed GAES Centros Auditivos had also gybed south, but is t his afternoon following an easterly route, around 250 miles behind Cheminées Poujoulat.

Stubborn Helena
Things are very different for the mid-fleet boats, with Renault Captur, We Are Water and One Planet One Ocean Pharmaton still contending with the light winds zone of the St Helena high. This trio may be shedding miles to the leaders, but look set to develop an intriguing contest of their own. They are currently separated by around 450 miles west-to-east, with Renault Captur on the east in fourth enduring the lightest, most unstable breezes, and One Planet One Ocean to the west, around 370 miles off the coast of Brazil, consistently around 3 knots faster.

Gaining ground from the north is Spirit of Hungary, with Nandor Fa and Conrad Colman banking miles in the trade wind conditions with solid 13-14 knot boat speeds. However, Fa spoke today of how conscious he was that such gains can be temporary :

“Now we are progressing very well because we are still sailing in the trade winds and the guys ahead are in different conditions, they have much less wind, and it’s a very complicated developing situation. As long as we are here and they are there we will make a little bit of a gain on them, but in a couple of days when we’ll be there also, it will be also complicated for us, so it’s a very difficult situation right now. How much can we keep from this gain and how much will we give back later? You never know, it is a kind of gambling. We study the weather all the time”.

Barcelona World Race, out of straight

NY to BCN, Safran is still leading the fleet
Add a comment