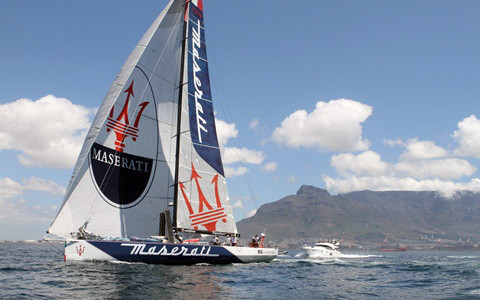 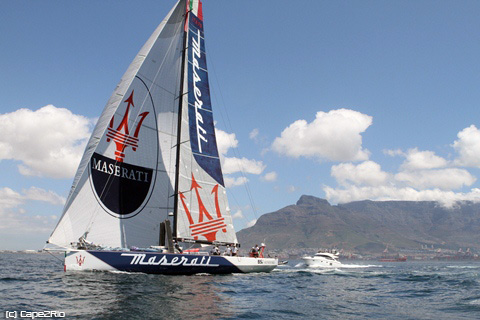 cape2rio15 giovanni soldini142 maserati112
The Cape to Rio Race sponsored by Xtra-Link started on schedule, cheered on by hundreds of spectator boats and many more people ashore, the... 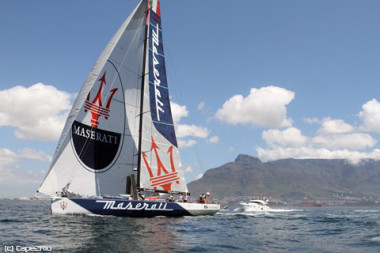 Cape Town – The Cape to Rio Race sponsored by Xtra-Link started on schedule, cheered on by hundreds of spectator boats and many more people ashore, the city of Cape Town gave the 36 yachts a magnificent send off. The Royal Cape Yacht Club bell was ringing out incessantly as the fleet left the dock. After a lap of Table Bay, the fleet headed out to the open waters of the South Atlantic, heading for Rio de Janeiro.

“It is front page news in Cape Town” commented Royal Cape Yacht Club Commodore, Dale Kushner, before departing to take on the 3,300 mile race double-handed. “It is a fantastic send off and Race Chairman, Ray Matthews and his hard working team deserve much praise. They have worked tirelessly for over a year to organise this race and along with the Iate Clube in Rio de Janeiro, the cheers and encouragement from well-wishers today are for the organising team as well as the sailors.”

The 3,300 mile race started benignly enough with bright sunshine and 10 knots of breeze, however as expected a low pressure system, emanating from the South Atlantic, reached the fleet on the first night. Touching Gale Force 8, the fleet were battling through 40 knot head winds and an angry sea state with streaks of foam visible in the darkness. Giovanni Soldini’s Volvo 70, Maserati was the first yacht to make it through the front and reaped the rewards. Once through the gale, Maserati eased sheets and changed heading to the north west, the canting keel flyer was power reaching away at well over 20 knots of boat speed.

Maserati leads a pack of yachts that have chosen to head west, including Robert Dates’ RP52, Scarlet Runner, Craig Sutherland’s Open 60, Explora and Scott Kelly & Dave Gough’s Leopard Catamaran, Tulliana, which leads the multihull fleet. However, a group of yachts has chosen to head north from the start. This strategy has avoided beating into last night’s stormy weather but another low pressure system is due to arrive to the south of their position. The yachts that have headed north may well find themselves in a windless area, whilst the yachts further south may make big gains.

Michael Robinson’s Nosebe 38, Investec Ciao Bella is one of the yachts heading north out of Cape Town and has been provided with an FB250 satellite communication system, by race sponsors Xtra-Link.

“So the day has come for me to substitute my stilettos for sebagos, and head off to tackle the South Atlantic. We spent the last few days enjoying all the good things: milkshakes, aircon, fried chicken and freshwater showers. But life is now somewhat less lavish. We’ve packed enough food for 23 days – so heaven forbid we take longer. The plan is for 21. Given the rubbish weather predicted for the weekend – don’t expect us to be too far away when you log in on Monday.“