Mini 6.50220 mini transat105 sailing3977
A sustained wind, getting their bearings on board after a three-week stopover, a chaotic sea… conditions were favourable for some minor breakages for the... 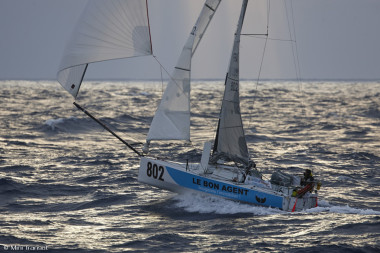 Atlantic Ocean – A sustained wind, getting their bearings on board after a three-week stopover, a chaotic sea… conditions were favourable for some minor breakages for the fleet. Many solo racers have already planned a pit stop. Favourites as candidates for adventure, not everyone reacts the same way: the key is mental stamina coupled with the ambitions that everyone has for this race.

It is kind of recurrent law: as long as the conditions are a bit tough, each race start (or leg start for the Mini Transat îles de Guadeloupe) results in minor breakage. When in the middle of the Atlantic, the question of choice does not arise, but the situation changes when a stopover becomes possible. The first of the competitors to return to shore was Frederick port Mesel (Double Trouble), who headed back to Arrecife seriously doubtful about the interest in continuing after breaking one of his rudders. The enthusiasm of his relatives and the encouragement of his buddies who stayed in Lanzarote convinced him to set off again with a brand new morale.

Scheduled turnarounds… or not
Others have diverted to Fuerteventura, such as Davy Beaudart (Flexirub), who suffered a tear in his medium spinnaker, and Nacho Postigo (Vamos Vamos), a broken rudder. For Davy, it is a harsh blow. The Lorient skipper has been forced to retire due its technical issues. Nacho Postigo, for his part, has really been biting the bullet. The string of setbacks he has overcome since the start of the race, have made him a touch philosophical. They will both announce their intentions to the race direction in the coming hours.

For some, misfortune persists. Maxime Eveillard (Heli Strategy) tore his mainsail on the first night and plans on doing a stopover in on one of the Canary Islands. Yann Claverie (MAP Product) is also en route to Gran Canaria. Others chose not to be daunted by the events and decided to forge ahead, even handicapped. Roland Ventura (Fondation Planiol), despite a loose gooseneck and a torn 5 code, has chosen to continue his race. He will be repairing it on the Atlantic. This is also what Pierre-Marie Bazin (Voiles des Anges) decided. With a broken push rod, damaged tiller, he decided to carry on to deliver to his boat across the Atlantic. When one is an agent of a humanitarian project as strong as his, it is a kind of moral duty not to give up the fight.

Battle on the route south
Ahead of the fleet, the leaders continue to push hard along the Mauritanian coast. The wind eased a little and averages drop in the beginning of night. They are closer to 10 knots than the 15-16 knots prevailing at the start. On a southerly route, Benedict Hantzperg (YCA Dhumeaux Secours Populaire) is still leading the way, while some racers already seem to be reassessing their route along the great circle, like Olivier Taillard (Alternative Sailing – Kerhis) or the Russian Yuri Firsov (Magnum Sports), aiming for the podium of the series boats.

After the 20-25 knots during the night, the trade wind dropped to 12 knots, accompanied by sunny skies. Dream conditions, just like we read about in tales of travels… The Mini Transat îles de Guadeloupe clearly has many dreams yet to offer to its contenders.