aymeric belloir4 benoit marie8 giancarlo pedote96 Mini 6.50220 mini transat105
There's been a small revolution in the Mini Transat. Giancarlo Pedote (Prysmian), who has reigned supreme since the start in Sada, has had his... 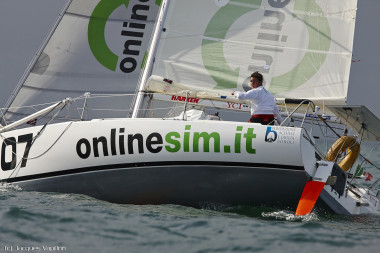 Atlantic Ocean – There’s been a small revolution in the Mini Transat. Giancarlo Pedote (Prysmian), who has reigned supreme since the start in Sada, has had his lead stolen away from him by Benoît Marie (benoitmarie.com). Between the two leaders the race has a long way yet to run, but others can still hope. Rémi Fermin (Boreal) is now 60 miles from the fleet leaders despite being the furthest south from the great circle. In the series boats, as the days pass so Aymeric Belloir (Tout le Monde chante contre le Cancer) looks ever closer to victory.

6% is the speed deficit, as of today, of his closest rivals, permitting Aymeric Belloir to hope for a finish at the head of the fleet in Guadeloupe. That’s nearly half a knot in eight knots average speed. As yet nothing is guaranteed, but it certainly helps him to take a serene approach as he goes into the last week of the race. Behind him it remains intense between Justine Mettraux (TeamWork) and Simon Koster (Go 4 It). Jean- Baptiste Lemaire (L’œuvre du Marin Breton) has chosen to continue dipping south. The first boats should arrive in Guadeloupe between 1 and 2 December, but the road ahead may still be quite bumpy. There is a small low pressure centerd in an abnormally low position which is causing a complete failure of the trade winds. For now, those who bet on a southern route are reap dividends, but it may well be that the situation is reversed in the next two days. You have only to look at the routes of the soloists to see that no option ensures certainty.

Glory goes to the opportunistic
Whilst ashore, we tend to be wary of those who change their minds too quickly, it seems that at sea it has become an admirable quality. A politician who accused his opponents of behaving like a weather vane, was aptly reminded that it is not the vane causing the rotation, but the wind. Hence the need to adapt. Julien Pulvé (MEXT-ICA), who seemed to have picked a southern option, now finds himself among the most northerly of the fleet. And with some gusto, as now holds sixth place in the prototypes. On the other hand, those who have been more consistent in their choice of track, like Rémi Fermin (Boreal) who is on a southern route, in now back up to 60 miles from the head of the fleet. And even this gap could melt in the blink of an eye as Rémi is closer to the direct route and the ranking is based on distance to the goal.

Watching the squalls
In the end, for prototypes and series boats alike, it seems that the first priority remains to take advantage of the wind shifts, and to be careful to sail angles that optimise progress towards the ultimate goal. In a message sent to the Race Director, Benoît Parnaudeau, aboard one of the support boats, confirmed the very unstable conditions over the Atlantic, including passing squalls that can be accompanied by sudden holes in the wind on their periphery. Today, the situation appears to have stabilised and in two days the singlehanders will get to test what look to be genuine trade winds. They will then have to negotiate their way around the small center of low pressure before then can drive on Guadeloupe. Mid-fleet, the most southerly competitors like Julien Marcelet (Nord Pas de Calais), Jerome d’Aboville (Bel), Thomas Guichard (Carrefour Bretagne) and Yoann Tricault (Schlüter Systems), will pass less than 300 miles from the Cape Verde Islands.

Mini Transat, the conquest of the west
Add a comment