giancarlo pedote96 Mini 6.50220 mini transat105 prysmian44 sailing3991
They say that the Portuguese trade winds rarely herald a walk in the park, and the passage round Cape Finisterre and the descent along... 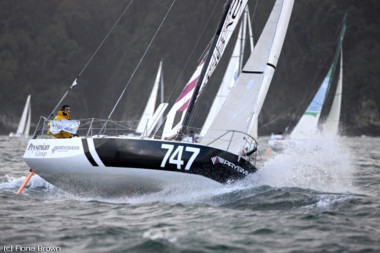 Cape Finisterre – They say that the Portuguese trade winds rarely herald a walk in the park, and the passage round Cape Finisterre and the descent along the coast of Galicia have done nothing to disprove this rule. Instead of the expected winds of 25 knots, the fleet has been confronted by a gale. With varying degrees of success …

The aim was to find the balance, to maintain good pace without pushing the boat too hard. Pushed down the track by a strengthening breeze, some Ministes have struggled to put the brakes on overnight. The accompanying support boat La Pampero, reported that their boat speed we peaking at in excess of 15 knots and they were being overtaken by some competitors on the attack. In these conditions its difficult to avoid broaching, sometimes with disasterous consequences.

In such beam seas at high speed the rudder is under a disproportionate load. It’s therefore unsurprising that overnight several competitors announced they have experienced rudder problems, thanks to failure of their fittings. This is particularly the case for Clement Bouyssou, who is uncertain as to whether he wishes to rejoin the race. The navigator of No War came to win and has no desire to spend the rest of his race to watching from afar as the favorites fight for victory. Ian Lipinski (Pas de Futur sans Numérique) is another of the more serious outsiders who sees his hopes of victory dashed having been dismasted. Yannick Le Clech (Diaoulic 692) had high hopes, especially since his race start was perfect. However, having been dismasted too he has not made a final decision. After specifying that did not require assistance, he is sailing to Cascais under jury rig, where he hopes to rerig quickly and put to sea again as soon as possible .

For now, the conditions have improved in the area. For the competitors closest to land, the sea has subsided considerably and the wind has dropped to around fifteen knots. Almost a holiday, especially as the sun made ​​an appearance in the area.

The headliners at the rendezvous
In prototypes, Giancarlo Pedote (Prysmian) has clearly been able to demonstrate that the special bow shape of his Reason design is equally competitive in these downwind conditions. The Italian navigator has regained the lead in the standings as of 12 noon, and has an 18 nautical mile lead over Benoit Marie (benoitmarie.com) and more than 20 nm on Bertrand Delesne (TeamWork Proto). This gap may sound significant, but, based on the current average speed of the boats, is only just over an hour. In the Series boats, Aymeric Belloir (Tout le Monde chante contre le Cancer) and Simon Koster (Go 4 It) have built a small gap on the rest of the fleet, which is led by Justine Mettraux (TeamWork) who, after a cautious start, has been working her way gradually to the forefront . In fourth, the amazing Robert Rosen Jacobson (Postillion Hotels) confirms once again that the doyen of the race is at ease in the breeze. But with physical age can come mental strength. And in this field, Robert could remonstrate with many.

Technical stops and retirements
Yannick Le Clech (692 Diaoulic) dismasted. A support boat is 12 nm away and heading to him. Under jury rig, he is en route to Cascais at a speed of 2.2 knots.
François Lamy (566 Guadeloupe Espace Océan) is heading to Cascais with a damaged rudder to try to fix it.
Carlos Lizancos (431 Reyno de Navarra) is heading for Cascais with a technical problem.
Maxime Salle (348 Bongo) has restarted from Baiona after solving his steering problem. Pilar Pasanau (519 Peter Punk) and Richard Hewson (816 RG650.org) are also due to leave the Spanish port following technical stops.
Yann Le Pautremat (483 Prep Nautic Sea Echo 1% for the Planet) and Sébastien Picault (198 Kickers) have confirmed their retirement.