Mini Transat, a little sunshine in a brutal world

giancarlo pedote96 Mini 6.50220 mini transat105
There's a holiday atmosphere in the fleet, the wind has finally eased in the race area and the Ministes can bring out their summer... 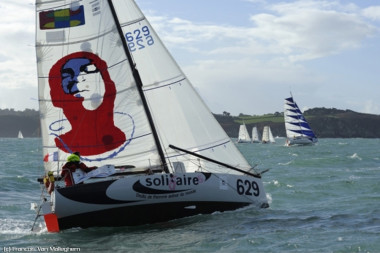 Atlantic Ocean – There’s a holiday atmosphere in the fleet, the wind has finally eased in the race area and the Ministes can bring out their summer wardrobe at last. As the sailors reduce the number of clothes they wear, so they can increase the amount of canvas they hoist. In the race everyone is gradually wending their way south. The main objective is to escape the northern latitudes where the wind continues to go light.

It’s been a successful move for Giancarlo Pedote (Prysmian) and Aymeric Belloir (Tout le Monde Chante contre le Cancer). They were the first to lead the way in the great movement towards a southerly route, and they are now being joined by the vast majority of the fleet. Benoît Marie (benoitmarie.com) still hangs on by six short miles, but as he alters course and moves away from the great circle he should quickly hand the leadership over to the Italian navigator. In the series boats, Simon Koster (Go 4 It) has stalled and is now over 50 miles behind the leader. For the time being Justine Mettraux (TeamWork) is keeping close to the great circle route. It is a big gamble for the Swiss sailor when you take into account that the weather forecasts anticipate a drop in the trade winds at the latitude of the Canaries.

Puerto Calero, the port of miracles
In Puerto Calero, the port has now emptied of its first occupants to make room for newcomers. Nicolas Boidevezi (Nature Addicts), Julien Pulvé (MEXT – ICA) and Louis Segre (Roll my Chicken) set off in unison. There’s nothing like having some immediate competition to improve your performance. We can expect these three to engage in a race within a race for the greater benefit of the trio. There are still five prototypes in Lanzarote Axel Tréhin (Ty Startigenn), Eric Jézégou (Déphémérides), Stan Maslard (Sefico Group), Thomas Guilbaud (Planète urgence) and Robin Marsh (Marcel for Ever) who are in isolation in the marina at Arrecife.

In the series boats, Renaud Mary (www.runo.fr) has the bit between his teeth, imitated by Pierre-François Dargnies (We-Van.com) who made an express stop of the regulation 12 hours to strenghten his rudder fittings. Others are still tinkering with the hope of returning to sea quickly. Some, like Raphaela Le Gouvello (respectocean.com) have clearly announced their intention to leave, others, burned out by the first stage, are not as emphatically decided. Puerto Calero is a kind of fountain of miracles where the walking wounded from the run down the Portugese coast can come to recuperate and rebuild their moral. But it is also a potential trap where ones energy can be sapped, stepping away from the race can put a big dent in one’s determination.

From Rabat to Madeira
Others do not have such qualms. Louis Mauffret (Solidaires) left Madeira hoping to have solved his power problems. The Brest navigator does not intend to throw in the towel, even if he has to do another express stop at Puerto Calero. Ludovic Méchin (Paris Texas), experienced a brief slump when he first stopped in Rabat, but he was met by such a chain of incredible solidarity that it convinced him to fix everything quickly and put to sea again, so that his Finot and the colors the Fondation Valerio Bruni-Tedeschi will cross the Atlantic with head held high. Behind them Diane Reid (One Girl’s Ocean Challenge) has left Cascais with her ever-present smile still firmly in place.

All these pit stops mean good business for some competitors who did not expect to find such a feast. Annabelle Boudinot (Agro 650) can proudly claim 7th place in the prototypes, just behind Michelle Zambelli (Fontanot) who will not hesitate, if the opportunity presents itself, to take advantage. All in good humor, as it should be.

Mini Transat, the Canaries are on the wing