benoit marie8 giancarlo pedote96 Mini 6.50220 mini transat105 prysmian44 sailing3991
The next few hours are likely to be decisive. An axis of low pressure sits slightly to the north of the fleet, not content... 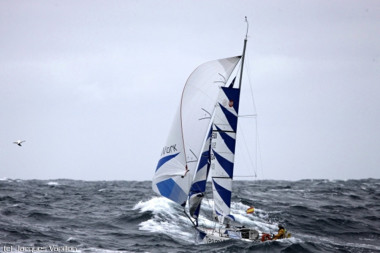 Atlantic Ocean – The next few hours are likely to be decisive. An axis of low pressure sits slightly to the north of the fleet, not content with causing a rupture in the trade winds, it could cause a real divide between the leading boats and their pursuers. Their routing strategies are looking very different depending on whether they are in one camp or the other.

Attention, trough! There’s a recalcitrant donkey backed into the pressure field of the trade winds that’s now creating mayhem on the road to Guadeloupe. It was he who generated the erratic light winds affecting the fleet, preventing the normal development of the trade winds that are usually powered by two anticyclones, over the Azores and Bermuda, to the north of the route. Those who might be tempted to head further south to escape his influence may find themselves having to pay a price. So that today, the safest route, the most obvious route, would be the closest to the great circle. For the former, the rule is simple: you have to win in the west. Beyond 44°W, the trade winds seems to be recovering and are expected to finally provide a few days of averages worthy of a Mini downwind, ie into double digits. But for others its about as clear as mud : in this famous trough, a small depression should form before heading to the north. This means, to its immediate south, light westerly or northwesterly winds, areas of flat calm, and sudden short storms! Bascially everything you need to try the patience of the most seasoned singlehander. For those that fail to make it to the the right side of this low pressure area in time, ie in the west, the solution could then be plunging southward. North or south, the puzzle is huge.

A few miles closer
To give an idea of the instability of the conditions, we just have to consider the positions and speeds of the competitors around Thomas Guichard (Carrefour Bretagne). While he is sailing at more than 7 knots, Raphaela Le Gouvello (Respectocean.com), Yoann Tricault (Schlüter Systems) and Jonas Gerkens (Netwerk 2) are less than 15 miles to the north and are barely exceeding a painful three knots. And in the south, Jean-Loup Chenard (Istuardo) and Raphael Marchant (Soréal Ilou) are making around two knots. At the front of the race, the best planning could be credited to Justine Mettraux (TeamWork), who is now more than 50 miles ahead of Simon Koster (Go 4 It) and 120 head of Jean -Baptiste Lemaire (L’œuvre du Marin Breton). In the prototypes Rémi Fermin (Boreal) and the duo of Bruno Garcia (Sampaquita) and Bertrand Delesne (Proto TeamWork) are separated laterally by more than 200 miles. It will be interesting to see if Rémi will be able to escape the clutches of the low pressures : if successful, he could benefit from a better wind angle and contain the northerners. At the other end of the spectrum … While Aymeric Belloir (Tout le Monde chante contre le Cancer) continues alone, he is positioned level with Bruno Garcia in terms of distance to the goal, and it is still clamped between Giancarlo Pedote (Prysmian) and Benoît Marie (benoitmarie.com) who still manages to keep his opponent at a distance.. However, if these two hold out to the end of the road, we will be guaranteed to have a new double prototype Mini Transat winner in the foot steps of Karen Liquid, which won in 1997 and 1999. 667 crossed the line as the winner in 2009, while 747 claimed victory in 2011. But from Rémi Fermin to Bertrand Delesne, there are three who will do anything for a new number to be inscribed on the roll call of Mini victors.