guadalupa8 mini transat105 sailing3991
When the leaders touch land in Guadeloupe, some will still have half of the Atlantic to cross before tasting a restorative ti punch, and... 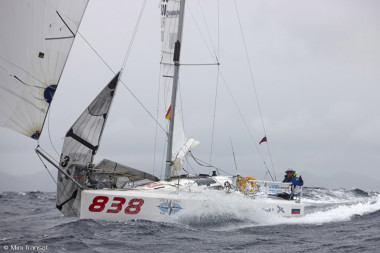 Atlantic Ocean – When the leaders touch land in Guadeloupe, some will still have half of the Atlantic to cross before tasting a restorative ti punch, and meeting their friends and family. To top their misfortune, the trade winds which have blown vigorously so far, will weaken for a few days. At the front of the leaders, Frédéric Denis in prototype, and the Lipinski – Pulvé duo in series boats, continue alone. Behind them, the suspense remains about who will end up being placed. The last stages before Guadeloupe will be decisive.

Damage leading to a stopover, a bad choice of route and lack of speed, are just some of the reasons that can take you to the back of the peloton. For some, the race was decided from the start in Lanzarote when they realised that they had to have a stopover. This was the case for Yann Claverie (MAP Product) who turned back to Gran Canaria, Fred de Mesel (Double Trouble) who returned to Lanzarote to repair one of his rudders, and Nacho Postigo (Vamos Vamos), forced to land in Fuerteventura. All of them started off again, but the wind that had accompanied the leaders of the fleet was not there for them. Doomed from the start to sail a totally different race, they have had to be patient in adversity, to take their troubles with good humour, and find other consolations. One imagines that for Nacho Postigo, it’s all about taking revenge on the bad luck that has hung over him since the start of the race. As a seasoned racer on prestigious boats such as TP 52, he was aiming for a very different personal adventure on the Mini Transat îles de Guadeloupe. Two other competitors had to stop in the Cape Verde Islands : François Jambou (Design and Build) and Dominik Lenk (dominiklenk.com). Starting again in last place, while competitors in front of them had already decided to put an end to their adventure, Francis and Dominik have demonstrated exemplary toughness that will surely be given the welcome it deserves in Pointe-à-Pitre.

Northern route
For others, the choice of route was particularly punishing. For this 2015 edition, there was no strategic alternative. Outside the southern route, there was no salvation. Despite this, there were a few wanting to tempt fate, such as the Russian Yuri Firsov (Magnum Sports), the Italian Federico Cuciuc (Zero @& T), the chinese Jingkun Xu (China Dream) and also, Michelet Sylvain (A chacun son Everest). They had to settle for variable winds, sometimes at speeds below 6 knots, while the rest of the fleet was speeding at nearly 10 knots in the south. For them, the rankings put together by the race directors and broadcasted by the Blu every lunchtime must have been an awful chore. One such competitor, interviewed after the first stage, had found the solution: turn off the radio after the weather information and don’t wait for the details of the respective positions.

Along the way
Lastly, there’s the cohort of those who came for adventure, without any more ambition than to cross the Atlantic at their own pace and to have fun, no matter what. Their philosophy is “Slowly and surely wins the race ” rather than “Show no fear.” This is another way of sailing an equally respectable race, chosen by January Heinze (Lonestar), Aitor Ocerin (Iparbeltz), Andy Abel (Pepen) and Lizzy Foreman (Hudson Wight). In the end, some will be disappointed ; those who have not managed to find their rhythm, or those who have been handicapped by technical glitches. Those who came with other ambitions, such as Quentin Vlamynck (Arkema), Hervé Aubry (Ixina – HSD Sails) or Mathieu Bourdais (Tous au Large). For them, the crossing risks seeming particularly long. But, whether they devour the sea at high speed or take it step by step, they all will deserve to say : “I sailed the Mini“.

Barcelona World Race, out of straight