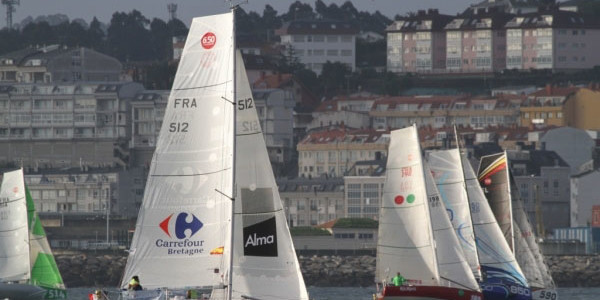 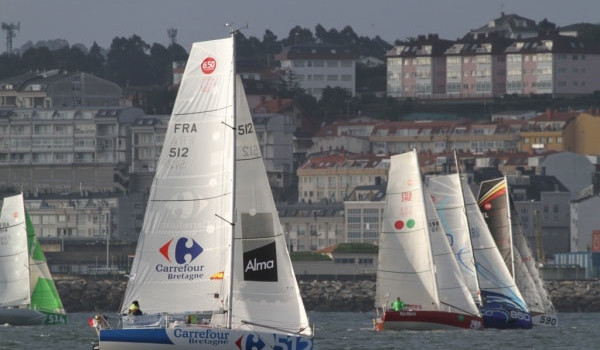 lanzarote35 mini transat105 sada7
It was a beautiful start ... It was as if the elements had finally come together to reward the tenacity of the players in... 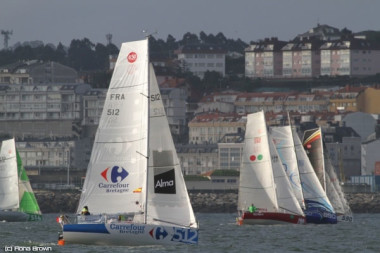 Sada – It was a beautiful start … It was as if the elements had finally come together to reward the tenacity of the players in this Mini Transat 2013. A light north wind and welcome rays of sunshine accompanied the fleet out of the Sada estuary before spinnakers could be hoisted, as the singlehanders swept past the the Tower of Hercules and then La Coruna.

Good start. At 9:45, Patrick Maurin, the President of the Race Committee liberated the fleet of 73 singlhanders who had come to the starting line. Missing were Jaanus Tamme (Ropeye) and Elise Bakhoum (Qéramix), who felt that they had already exhausted their emotional reserves and could do no more. The Belgian Sophie de Clercq (Ville de Marseillan) had been undecided about whether she will be able to start the second stage. For the past two days she has been subject to sudden spells of dizziness and has been consulting with medical advisors at Sada Hospital who have not yet been able to identify a specific cause for her discomfort. In the end, knowing that she could be putting others into dange if she went ahead, Sophie decided, in agreement with the race organisers, to throw in the towel. Knowing how to identify and assess the risks that we take for oneself and for others is all part of being a good sailor. In Sophie the Mini Transat loses one of the competitors who truly represent the essence of the race.

The favourites are peaking
Out of the start line, it was Ludovic Méchin (Paris Texas) that got this tip of his bow over the line first, while in series boats Alberto Bona (Onelinesim.it) also got an advantage over the rest of the fleet. As the northerly wind quickly increased by a few knots, the situation was changing rapidly and it wasn’t long before the big guns were making their presence known at the front of the fleets. By the entrance to the bay, it was Gwénolé Gahinet (Watever / Logways) who led the fleet, followed by Nicolas Boidevezi (Nature Addicts) and Louis Segre (Roll My Chicken). In the series boats, Yannick Le Clech (Diaoulic 692) got the better of Ian Lipinski (Pas de futur sans Numérique). For Yannick it was a nice nod to his friend Damien Cloarec, who was forced to abandon the race due to a persistent tendinitis. These guys from the Bay of Morlaix truly know what brotherhood means.

Little by little the wind rose and Nicolas Boidevezi rounded Cape Finisterre at 16.00 with a comfortable lead over his rivals having already gained a buffer of eight miles bonus on a pack led by Benoît Marie (benoitmarie.com) and Giancarlo Pedote (Prysmian), the speeds of the leading group regularly hitting 17 to 18 knots. Jonas Gerkens (Netwerk 2) on his Pogo was mising it up with the prototype fleet at an average speed of more than 12 knots. The other leaders, in descending order, obviously opted for caution with Bertrand Delesne (TeamWork Proto) heading Gwénolé Gahinet . Finally, at the back of the fleet, several competitors have made it clear they will be taking their own route. For example, Yoann Tricault (Schulter Systems) clearly has no intention of being dictated to by the leaders and had been gradually picking up pace as he finds his feet. The key is to arrive first. Bearing in mind that anyone needing to make a stopover for repairs is required to layover for a minimum of twelve hour stopover its easy to see how quickly places can be gained by those who manage their boats best.

First damage
Obviously, putting the boats through such tough conditions has an impact on equipment. Some competitors have already reported damage. Annabelle Boudinot (Agro 650) broke her bowsprit but has a spare sprit on board and should be able to fix it quickly. Axel Tréhin (Ty Startigenn) has suffered the same punishment and will try to jury rig with equipment he has at hand to avoid a forced stop. However, Joel Miro Garcia (Dame Argo) has headed into the port of Camarinas after informing a support boat that he has broken one of his two rudders.

Between the Sisargas Islands, west of La Coruna, and the southern tip of Cape Finisterre, the coast has earned the nickname of “The Coast Of Death”. It is understandable that some have chosen to push their machines hard to get this rugged landscape, that can give those of a nervous disposition an unpleasant frisson, well and truly behind their transoms. Nevertheless, there are still a lot of miles ahead of them and, as the fleet was wisely reminded by the routing information and the good advice that accompanied it for the Ministes, “The important thing is not to go fast for four hours, but to keep up a good steady pace for four days or more…” Especially since it seems that the fleet is on track to maintain these strong conditions all the way to the islands of Lanzarote and La Palma. Others reply that you have to make hay while the sun shines. To each his own truth … one thing is certain, only the winner will be right.