MiniTransat, six months until the start 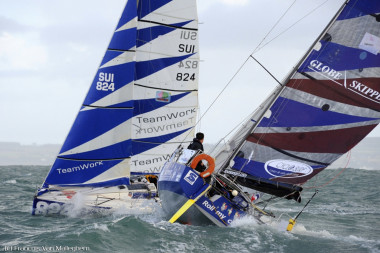 Dournanez – On 19 September 2015, there will be 84 competitors heading out to do battle with the Atlantic for the 20th edition of the Mini Transat. As was the case in 2013, the race will set sail from Douarnenez in north-west Brittany. For this edition, the aims of the organisers are twofold: to build on what made the 2013 edition such a success and to strengthen the points that required tweaking.

Continuity and facilities
For this second edition starting out from Douarnenez – the third if we go back to 1991 when the town first hosted the Mini Transat – the Douarnenez Courses team is building on past experience whilst ensuring continuity:
– Support and reinforcement of the on-site teams in terms of logistics, sports management and communication.
– Return to Douarnenez’ first harbour, the basin of Port Rhu, a genuine showcase for the Mini fleet that proved so successful in 2013.
– Rallying together of local volunteers, whose ethos is totally in keeping with the values of the Mini Transat.

Equally, analysis of the 2013 edition has given the organisation team an opportunity to introduce a few developments with a view to guaranteeing an even finer event:
– Moving the start date forward to 19 September with a longer stopover in Lanzarote.
– Retaining the original early-November start date for the second leg so as to avoid any risk of hurricanes in the area surrounding the West Indies.
– Strengthening of the partnerships with Guadeloupe and the hosting of competitors.

A line-up rich in diversity
With some 78 racers already pre-registered, the Mini Transat is once again guaranteed to have a full line-up. Among the entries we find some of last edition’s front runners in the proto ranking including Michele Zambelli, Ludovic Méchin and Romain Mouchel, who are back once more to try their luck. They’ll be joined by some of the movers and shakers of the Mini Class, who have traded in their series boats for a prototype, such as Clément Bouyssou and Davy Beaudart with his Maximum, the sistership to the famous Magnum, which won the Mini Transat 2011 and secured second place in the Mini Transat 2013.

Another competitor making the switch from a series boat to a proto with a rounded bow is Swiss sailor Simon Koster. In a month and half, his scow bow prototype build will be complete.
“The Mini design is by Mer Forte. In addition to her scow bow, my Mini will boast a number of other innovations, but I don’t want to reveal all before the launch! Construction began in early September in Lorient and the boat is currently in Switzerland for her fitting-out. My goal is to launch her in late April so as to take the start of the Mini en Mai* on 4 May.” Keep a close eye on the pontoons of Brittany then for the chance to discover one of this year’s rare new prototypes.

In the series fleet, all eyes will be on the battle between the Nacira designs, which dominated the competition in 2013 in the hands of Damien Cloarec, Jonas Gerckens and Patrick Girod. Also worth following are the Argos, led by Tanguy Le Turquais, and the two latest newcomers (provided they are granted the status of a series boat), the Pogo 3 and the Ofcet, skippered by Ian Lipinski and Julien Pulvé respectively.

Beyond the competitive aspects, it’s the eclecticism of the fleet which always makes an impression: a third of the solo sailors will be competing in the prototype category, with 13 different nationalities from old Europe to China, Russia, through to Estonia. Just three women are currently pre-registered, all of them from outside France, but there is still time for the female contingent to get things back on track and redress the balance.