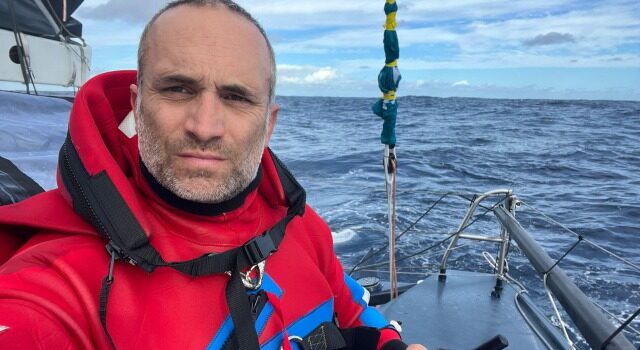 Route du Rhum89
"Hello everyone. I am safe and sound on a freighter which will drop me off in the Azores tomorrow morning. My IMOCA Nexans -...

Atlantic Ocean – “Hello everyone. I am safe and sound on a freighter which will drop me off in the Azores tomorrow morning. My IMOCA Nexans – Art et Fenêtres sank in flames before my very eyes. All my dreams were went down with my boat.”

At 11:32 UTC this morning, whilst heading to Cascais in Portugal on his IMOCA Nexans – Art & Fenêtres after a leak had forced him to leave the Route du Rhum-Destination Guadeloupe race course over the weekend, solo skipper Fabrice Amedeo had an explosion on board which was immediately followed by a fire.

Amedeo was forced to abandon his boat which sank and rescue operations were immediately initiated. Alerted by the race management of the Route du Rhum – Destination Guadeloupe, the Portuguese maritime rescue services contacted the vessels present in the area of the accident. The nearby freighter M/V MAERSK BRIDA diverted and the rescue operation went well at 14:32 UTC this afternoon. Amedeo is now safe on board the freighter, he is not injured. He will be disembarked tomorrow in the port city of Ponta Delgada on the south coast of the island of São Miguel, in the Azores archipelago.

“Sunday morning: everything is fine on board, and I am having a great race. The boat is flying hard in the squalls and the sea is heavy. Suddenly, I realize that my ballast has exploded on a wave and that I have several hundred litres of water in the boat. I stop to be safe and start to empty everything. At that moment, the batteries were immediately affected by the water and failed and I had a complete blackout on board. I had no more electricity: no more autopilot, no more computer, no more electronics. I decide, in consultation with my team, to proceed cautiously towards Cascais.

Sunday afternoon: big smoke on board the boat. I use the extinguisher, I put on my TPS (survival suit), I alert the race direction who asks a competitor in the IMOCA class to divert to assist me if necessary. The smoke eventually stops. I decide to resume my passage to Cascais. I meet James Harayda, the skipper of Gentoo who had come to the area to help me. I thank him and resume my passage. I completely dry the boat and prepare myself for a difficult passage. I slept two hours last night to recover from my emotions then steer 6 hours tonight.

Again, I have 2h30mins of siesta then 7 hours on the helm. Shortly after 12:30p.m today there is more new smoke on board. Followed by an explosion. I grope my way back into the cabin and manage to retrieve my TPS. My Grab bag (survival bag) had remained in the cockpit. I am going back to get my wedding ring. I hit the fire extinguisher, but nothing happens. The smoke is not white like yesterday but yellow. The cockpit warps and yellows. Seawater spray sounds like the sound of water hitting a saucepan. I understand that I will have to evacuate. I warn my team of a possible evacuation. When I hang up, I am then at the back of the boat ready to trigger my survival: a torrent of flame comes out of the cabin and the coach roof.  I am caught in the middle of the flames. I can’t even open my eyes. I manage to push the life raft into the water and jump.

Normally the end that holds the liferaft to the boat is supposed to let go. It doesn’t let go. The boat, which I had time to steer but which is still going forwards pushed by rough seas, pulls it and it fills with water. I manage to get on board without letting go. I think that’s where it all happened and things turned the corner to work out right. I say to myself, “if you want to live you have a few seconds to find the knife and cut.” The IMOCA pulls me back towards it. The waves bring me dangerously close to it. I finally find the knife and cut. My raft is drifting downwind of the boat which is fully on fire. It takes 30 minutes to sink. I spoke to the boat and thanked it.  We were going to go round the world together in two year’s time.

Then, you have to get organized. The satellite phone did not like the water in the raft and doesn’t work.

I say to myself, “nobody knows that the boat has sunk and that you are in your raft, if you activate the beacon on the IMOCA that you were able to take with you and you trigger the one on the liferaft,  they will have the information”. That’s what I do. I can’t find a baler on board. A Tupperware box containing batteries will save me. I empty the raft. I begin the wait. I stand behind the raft so that it does not overturn. The sea is very, very big I take stock of the equipment on board and prepare for what’s next. I gather the flares. I put the VHF around my neck. I spend three to four hours in this raft. I am surprisingly calm. The raft regularly fills with water from the lightly breaking waves. I understand all this but feel safe. I know, however, that nothing is over.”

Transat Jacques Vabre, they are off