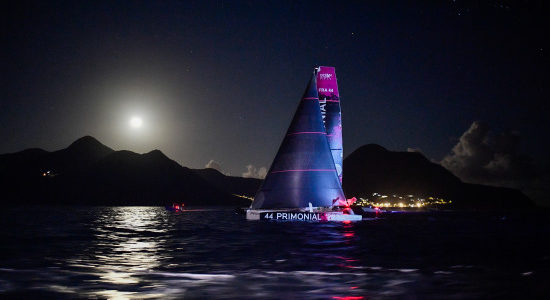 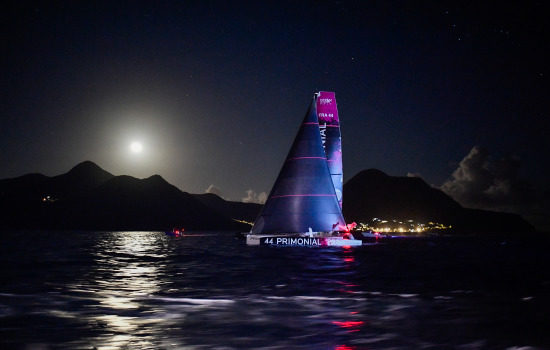 Matinique – Primonial has taken line honours and the Ocean Fifty multihull title in the 2021 Transat Jacques Vabre race. French pair Sébastien Rogues and Matthieu Souben crossed the line in Martinique ahead of Koesio in second. Britain’s Sam Goodchild was third aboard Leyton.

Sébastien Rogues and Matthieu Souben crossed the finish line in the dark of night, under a full moon and drenched by light rain to claim the Ocean Fifty title – the first of 150 boats still racing to cross the line near Martinique’s legendary Diamond rock.

Talking amidst the celebrations on board, Matthieu Souben told us, “We’re very emotional right now. We didn’t expect it to be easy, we said before the start that there were no favourites. It’s a really great race but it has been hard because it has been long, longer than expected. It has required a lot of commitment, the chess game on the water started early. We gave it our all and are totally exhausted now.”

Le Roux said, “To have a good regatta, you need good competitors and I think with the whole class it has been very close. There were no big gaps and the racing was intense. This second place suits us perfectly.”

The only non-French sailor in the Ocean Fifty class took third place, 3 hours 48 minutes and 29 seconds behind the winner. Britain’s Sam Goodchild and co-skipper Aymeric Chappellier on their boat Leyton took 15 days 17 hours 15 minutes and 43 seconds to cover the course.

Straight after crossing the line Goodchild told us, “It was our first transatlantic race on this type of boat. These are extraordinary boats that can go very fast, so you have to be careful. We learned a lot about the boat and ourselves.”

Solo Round The World Record, Fracois Gabart in less than 43 days