class 40203 fabien delahaye4 gdf suez1 sailing3989 séastien rouges1 transat jacques vabre78
Having had a unchallenged lead since the race re-started from Roscoff in the very early hours of the morning of Sunday 10th November, French... 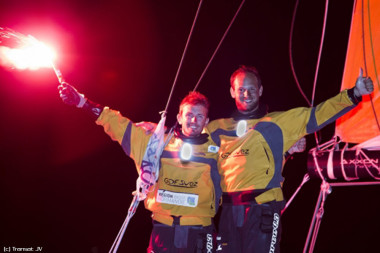 Itajai – Having had a unchallenged lead since the race re-started from Roscoff in the very early hours of the morning of Sunday 10th November, French duo Sébastien Rogues and Fabien Delahaye sailed GDF Suez across the finish line off Itajaí, Brasil this Friday evening at 2056hrs local time (2256hrs UTC) to win the Class 40 fleet of the Transat Jacques Vabre from 26 starters.

Sailing the Sam Manuard designed Mach 40 design, the duo have been comfortable leaders for almost the entire race, only recently coming under pressure when they lead into light, unsettled winds at Cabo Frio at the entrance to the Bay of Rio.

Early in the race they made a carefully calculated technical pit stop into Muxia on the north west corner of Spain to scale their mast and replace two vital wind vanes. Their stop cost them less than 50 minutes and they still lead the fleet by 19.8 miles when they emerged.

Benefiting from sailing first into the robust, fast sailing of the Portuguese trade winds they were able to extend ahead of the German Franco duo on Mach 40 sistership Mare, Jorg Riechers and Pierre Brasseur. On 22nd November they lead into the notorious Doldrums with a lead of 77 miles on Mare. Their astute choice of route allowed them to increase that margin by 30 miles. Only later did they reveal that they had actually blown up two key spinnakers in quick succession which ultimately cost them some of their lead in the lighter conditions further down the race course. Indeed at Cabo Frio their lead was halved and the second placed Spanish duo Alex Pella and Pablo Santurde on Tales Santander closed to within 34 miles on the Bay of Rio.

When GDF Suez crossed the line for victory the second placed Class 40 was around 50 miles behind. It is the first big ocean race win for both sailors.

Rogues said that the two keys to their win were being able to break first through the high pressure ridge off Cape Finisterre which allowed them to get into the Portuguese trade winds first, and their passage through the Doldrums, identifying a narrow corridor using a series of Quickscat images

Sébastien Rogue, skipper GDF Suez: “Without the big spinnaker it was difficult us and on the Brazilian coast we did not have the good sails, we saw the other catching up fast. When we launched the big spinnaker and it held then only then did we know we could be alright. We repaired it during the upwind after the Doldrums and only put it up recently. On the Brasil coast we did not need it. But on every ranking we could see the other were catching us. Three days ago we thought we would finish third, off Rio we put up the big spinnaker and saw that it worked, and only then with Fabien did we say, OK maybe we can win this race.”