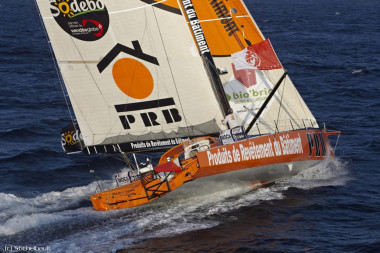 Itajai – Breaking the finish line on an overcast, humid morning in Southern Brasil, French duo Vincent Riou and Jean Le Cam won the IMOCA Open 60 class at 10h 41min 47 sec local time (12h 41m 47s UTC/GMT) completing the 5450 miles course to Itajaí from Le Havre. The elapsed time for their race is 17d 0h 41mn 47sec‏, sailing at an average speed of 13.21 kts for the theoretical course. In fact they sailed 5771 miles on the water, at a real average speed of 14.12 kts.

When they finished, the second placed IMOCA Open 60 was around 50 miles behind in second.

It is the first major transoceanic race triumph for Riou since he won the Vendée Globe solo round the world race in 2005 and the biggest recent win for veteran Le Cam.

Appropriately as winner of the class in this 20th anniversary edition Riou was one of the competitors in the very first edition of the Transat Jacques Vabre in 1993 racing a multihull.

The duo win their class despite an express pit stop in Madeira to replace a damaged rudder blade: “Rudders are broken now because of the pressure we put them under, whether ours or that of Macif” commented Le Cam prior to finishing, referring to near rivals MACIF who also made an early pit stop, in Portugal, to complete a similar repair.

The duel for second place was being played out as PRB finished, only a few miles separating second placed Safran (Marc Guillemot and Pascal Bidégorry) and Master CoQ ( Jéremie Beyou and Christopher Pratt).