le havre7 transat jacque vabre2
With a worsening forecast for difficult weather thorough Monday night into Tuesday and immediately thereafter, (squalls to 50kts) the race direction of the Transat... 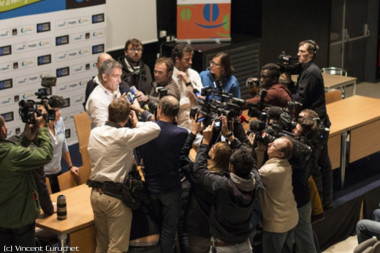 Le Havre – With a worsening forecast for difficult weather thorough Monday night into Tuesday and immediately thereafter, (squalls to 50kts) the race direction of the Transat Jacques Vabre have decided to postpone tomorrow’s (Monday’s) scheduled start to a later date.

On current forecasts Thursday is considered a possibility. The double handed race across the Atlantic from Le Havre to Itajaí, Brazil has a strong legacy as a multi class event and the race directors are resolute in their determination that the entire four classes fleet compete in the best possible conditions.

Manfred Ramspacher (sporting director) explained: “The event sport direction the entire organization has made the decision to postpone the start until a more favourable situation arrives, which could be Thursday.”

“Winds 30 to 50 knots which could endanger the skippers and their boats are forecast. We are well aware that classes such as IMOCA could start. But our main concern is the overall safety of the crews.”

“Our decision is based on the forecast that we could get away from Le Havre but with difficult conditions and some uncertainly at the ras Blanchard, at Ushant, and some very difficult conditions at the start of the Bay of Biscay. Our first aim is to ensure we can get maximum number of boats finishing Itajai.”

“We must maintain this solidarity in the event. The possibility of starting Wednesday or Thursday not for certain. We think it can happen, but it is still uncertain. The MOD 70 are still programmed to start on Wednesday or Thursday, we will decide in consultation with them. An IMOCA race might have been able to start, and I can understand their disappointment, but we are a multi-class race.“

Transat Jacques Vabre, the village is open and the prologue completed