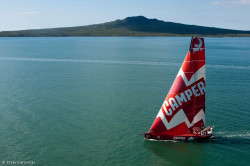 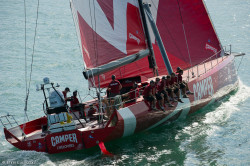 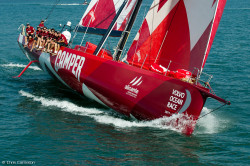 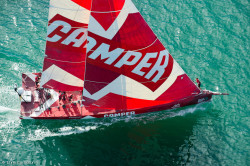 The yacht left the team’s base at Viaduct Harbour in the early afternoon. The sea was calm, the wind a soft breeze – ideal conditions for a maiden sail to give the sailing crew of 11 and the12 designers, engineers and systems experts on board the chance to check the product of more than 12 months’ work.

But the light conditions denied the tv cameramen and print photographers in a chase boat the opportunity to get the action shots they were seeking of the yacht in its dramatic livery.

After 3 1/2 hours on the water, skipper Chris Nicholson declared himself satisfied with the yacht that he and his crew will race 38,000 miles around the world, starting in Spain on Novembers 5. “We did what we wanted to do today and that is always a plus.”

Even the photographers and cameramen were happy, even though they would have liked more wind. And they might get that before too long. The yacht will undergo further testing off Auckland over the next 10 days – and with luck providing the cameras with some action shots – before embarking on sea trials that will include visits to five east coast ports of Tauranga (April 26), Gisborne (April 29), Wellinton(May 2), Dunedin (May 5) and Lyttelton (May 7 and 8).

On May 9, Camper will leave Lyttelton for a 2000 nautical mile voyage to qualify to compete in the Volvo Ocean Race.

And today was the first opportunity to see the yacht’s full graphic design. Her striking graphics are from by leading British studio Farrow. Their projects have gained worldwide acclaim, and creative director Mark Farrow is considered to be one of the most important graphic designers working today.

The graphic design of a 70ft ocean going yacht is a massive departure for a studio best known for contemporary music packaging.

Mark Farrow says: “This is an amazing project and one of those that, as a team of graphic designers, you dream of being involved in. To be given a canvas of a hundred foot tall masts and a seventy-foot carbon- fibre boat is very, very special! In Camper we have found a creative kindred spirit who has been totally receptive to our ideas and who has pushed us creatively more than most clients, which is refreshing to say the least.”

Part of the inspiration for the design is taken from “‘dazzle painting”, a paint scheme extensively used on battle ships during World War One. Drawing inspiration from abstract artists, a dazzle ships’ paint work was composed of a complex pattern of geometric shapes, interrupting and intersecting each other.

“Everything that you need is within the Camper logo. When you start working with it you instantly start to get a feel of sails… so we started developing patterns for each individual sail using only the Camper bridge. With each sail combination, a different pattern emerges. Hopefully as the boat is sailing around the world you’ll see all these different versions. It will be forever changing and shifting. It is a complicated process to arrive at something that works. I really cannot wait to see it on the water,” he said.