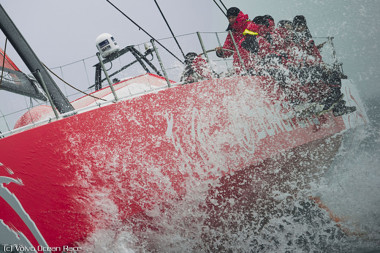 Auckland – Last week Charles Caudrelier chose six Academy Squad sailors to sail with him towards Auckland for the first training leg of the project allowing them to make the transition from Academy Squad to Race Squad. They are now well into their first week at sea and it has been a bruising start for the novice offshore Chinese sailors who are learning first-hand about ‘Life at the Extreme’! Parallel to this adventure, back in Sanya the remaining Academy Squad sailors have been fighting their way to the top of the Hainan Regatta leader board.

The Volvo Ocean 65 Dongfeng left Sanya Serenity Marina on Saturday, 22nd March their 5,200+ nautical mile journey a re-enactment of Leg 4 of the Volvo Ocean Race. “It’s exciting being part of Dongfeng Race Team, you just don’t feel alone anymore and for us, even though we are in competition with one another we already feel like a large team. Dockside when we left there were a lot of people there to see us off, our sponsor Dongfeng, Serenity Marina, our shore team and media,” said Race Squad sailor Ying Kit Cheng.

Life on shore was quickly forgotten as Charles’ crew faced daunting conditions – strong winds, rough sea state, hard on the wind making life on board extreme. “We have already performed our first emergency surgery onboard when Yiran Zhang fell from the pit door onto the floor below which is one of the most awkward places to fall as the floor below is not flat… his cut has now been stapled,” reported Kit.

Charles Caudrelier was under no pretence when he accepted Bruno Dubois’ offer to become Skipper of Dongfeng Race Team. Knowing the foundations of the project he accepted to train the Chinese recruits and prepare them as best he could for the Volvo Ocean Race. “Some of the Chinese sailors are towering above the rest with a motivation that is hard to match and I’m pleased to say that it’s becoming a pleasure to sail with these guys. This training leg is proving it’s worth because it is only in extreme situations that you really get to know someone. There is an old French expression that says ‘It takes the same time to get to know someone as it does to eat a kilo of salt’. My reply to this is ‘Do leg 4 of the Volvo Ocean Race and it’ll tell you everything you need to know about someone’. As the skipper it is in these situations that I choose the men I want to sail with,” writes Caudrelier. “The Chinese guys are coming back to life. Although I feel it is unfair to insinuate that it is only the Chinese crew that are ill as it is not – one of the Western guys onboard has suffered from sea sickness his whole life despite being one of the best sailors I know. It’s more about how you deal with it and I think this is what the Chinese guys are slowly understanding.”

The Dongfeng crew have many days ahead of them still and the learning will continue, not just about themselves and the limits they can endure, but also about the new Volvo Ocean 65 boat which is an integral part of any training leg.

“Both teams have been fiercely fighting their way to the top of the leader board in this week-long regatta which involved both in-port racing and offshore. We are extremely proud to have finished with Dongfeng 2 in second place and Dongfeng 1 in third place,” said Team Coach, John Thorn. The level of enthusiasm these young sailors showed also impressed Brian Thompson: “Zhang Peng was driving while the rest of us were hiking,” joked Brian after Dongfeng 2 won the Sanya in-port race.