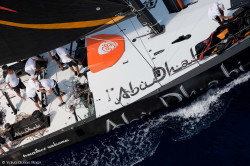 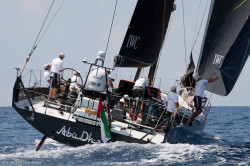 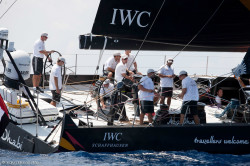 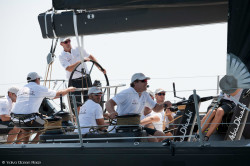 The yacht – which was developed by the USA’s Farr Yacht Design and built by Italy’s Persico S.p.A, in Bergamo – is one of the most sophisticated ever constructed. Conceived in March 2010, it is the combination of more than 7,000 design and 49,000 build hours.

Emblazoned with a striking falcon, the national emblem of the United Arab Emirates of which Abu Dhabi city is the capital, soaring across its bow and main sails, the brilliant black yacht is tasked with carrying the 11-strong Abu Dhabi Ocean Racing through the nine-month, 39,000 nautical mile ‘Everest of Sailing’, which begins in Alicante, Spain this October.

“We have invested in the very best yacht design and build technology available to underpin the expertise of the highly-skilled Abu Dhabi Ocean Racing team we have formed,” said His Highness Sheikh Sultan bin Tahnoon Al Nahyan, Chairman, Abu Dhabi Tourism Authority and Team Principal, Abu Dhabi Ocean Racing. “This level of commitment is a clear signal of our intention to deliver a first-class performance in our debut Volvo Ocean Race and in our podium ambitions.”

The yacht’s international debut, set against the spectacular backdrop of the Italian Riviera, was attended by VIPs from Volvo Ocean Race, the Mayor of Portofino and Official Team Partner, the luxury Swiss brand IWC Schaffhausen.

Abu Dhabi Ocean Racing, which boasts one of the most international crews ever assembled since the Volvo Ocean Race began in 1973, will now undergo final training in Europe, having spent the winter in the UAE capital.

Over the last few months, the team – the first Volvo Ocean Race Arabian challenger – has been spread all over the globe with weather training in the USA, wind-tunnel sail testing in New Zealand, race practice in the UK and Hong Kong, as well as mast construction in Spain and yacht build in Italy.

The team – which is skippered by double-Olympic medallist, Ian Walker of Great Britain – has set its sight on a rigorous Atlantic Ocean sailing programme, before heading to the race start in Spain this October.

“To get to this stage has been a phenomenal international effort which has, in many ways, set new benchmarks. With just under three months to go until the start, we have a demanding time ahead yet with the full team assembled and our new yacht raring to go, we are more than ready to meet it head on,” said Walker.

Representing five continents, the outfit also boasts two UAE nationals – 22-year-old Olympian Adil Khalid, and 27-year-old Butti Al Muhairi – who beat off more than 120 hopefuls to earn their places on the sailing and shore teams respectively. Their participation will mark the first time an Emirati has competed in this ultimate endurance race.

The 2011-2012 Volvo Ocean Race will be contested around six continents and across four oceans before ending in Galway, Ireland, in summer 2012. Abu Dhabi will welcome teams from 1-14 January 2012 after they complete a punishing leg from Cape Town.

Abu Dhabi Tourism Authority has committed to staging a fortnight-long, emirate-wide celebration to mark the Volvo Ocean Race arrival – from headline concerts and interactive race villages for the whole family to great holiday packages across Abu Dhabi’s plethora of 4- and 5-star resorts.

The emirate is well progressed with plans for a specially-designed 55,000m² ‘Destination Village’ being built on Abu Dhabi’s picturesque Corniche breakwater. The ‘Destination Village’ – which will be around the size of eight football pitches – will open free-of-charge to the public daily from December 30 this year to January 14, next year. Abu Dhabi Tourism Authority anticipates welcoming more than 100,000 visitors through the gates.

The village will be highly interactive and will leverage the emirate’s rich maritime heritage. It will be packed with activities and entertainment including exhibitions, shows, simulators, hospitality, game zones, food & beverage outlets and merchandise shops.

The Volvo Open 70 racing yacht is sailed by professional athletes, who race around the world with the prevailing winds.