atlantic ocean3 Volvo Ocean Race1173
Six days into this race, and the sailors can still see each other, creeping alongside the Western Sahara sand dunes. It’s stressful. 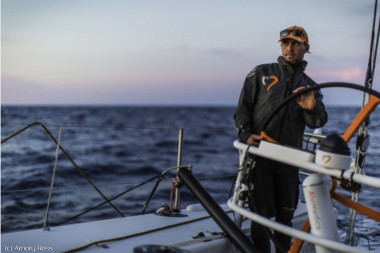 Atlantic Ocean – Six days into this race, and the sailors can still see each other, creeping alongside the Western Sahara sand dunes. It’s stressful. Dongfeng Race Team have held their lead since yesterday morning. But Team Alvimedica, Team Brunel, Abu Dhabi Ocean Racing and Team Vestas Wind are only two to three miles behind the Chinese boat. A lot is at stake right now.

With stronger trade winds only a couple of hours away, every move will determine who first catches 20 knots of awesome, accelerating northeasterlies.

Every manoeuvre can affect who will be best placed to head west and finally sail past the Cape Verde Islands, and towards the Doldrums and Fernando de Noronha, a waypoint off the Brazilian coast.

“I keep wondering if this is going to become like basketball, where you watch 38 minutes of a close game to get to the last two minutes when there’s this intense finish” says Ian Walker, Abu Dhabi’s skipper.

“We’re almost doing tourism along the African coast – jokes Dongfeng’s Onboard Reporter, Yann Riou – We’re making the most of our free time, resting. We don’t forget the race, but it allows us to escape a bit”.

Despite this relaxed attitude, they continue to lead. Maybe a little less pressure can be a good thing.

Then, there is the pressure felt onboard Team SCA, who are now 33 miles behind the first boat.

“We went from hero to zero, well, not quite zero – says navigator Libby Greenhalgh – We kind of knew it was coming because you could see the boats sail away. We had a tricky night and then in the morning we didn’t quite position ourselves correctly”.

“As Sam keeps telling me, we’re only a sixth of the way into the race – she softens – There are still 5,500 miles to go, and there are some pretty big decisions still to happen. So we’re going to go find our ladder and climb it”.

One thing for sure. It’s their competitive spirit that keeps them pushing, whatever the other pressures.

“No one got much sleep at all, but that’s the new style of the race, with the one-design boats – mutters Chris Nicholson, Vestas’ skipper – That’s how differences are made”.

After a week of scattered naps and interrupted off-watches, of tactical debates, sail changes and technical issues, they haven’t lost their focus.