team alvimedica23 Volvo Ocean Race1173
Team Alvimedica have won their claim for redress after they diverted course to sail to the assistance of the grounded Team Vestas Wind in... 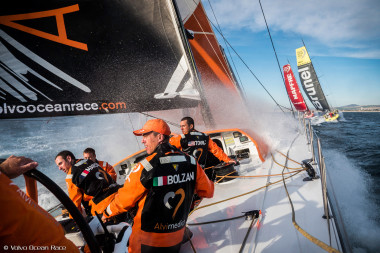 Abu Dhabi – Team Alvimedica have won their claim for redress after they diverted course to sail to the assistance of the grounded Team Vestas Wind in Leg 2 of the Volvo Ocean Race.

They originally placed fifth out of the six finishers in the stage from Cape Town to Abu Dhabi but an independent ISAF jury hearing ruled that the time lost assisting Chris Nicholson’s crew on the night of November 29 cost them a position.

They were consequently given points for fourth for the leg by the jury on Tuesday (see updated placings below) although their official position for it remains fifth.

Enright’s crew diverted to the remote reef near St Brandon, 430 kilometres from Mauritius, to sail close to the stricken Team Vestas Wind. They gave radio assistance but did not eventually need to take the Danish boat’s crew on board after they were picked up by lifeguards.

In the hearing in Abu Dhabi on Tuesday, Enright argued that his team lost time and later favourable wind conditions for their actions which were widely praised by both the jury, the Race and rival teams.

“We have decided to grant you redress by giving you a point for fourth place without affecting the finishing positions of the other boats,” jury chairman Bernard Bonneau told Team Alvimedica witnesses, skipper Charlie Enright (USA) and navigator Will Oxley (AUS).

“Obviously, we’re very pleased with the ruling,” said Enright. “But we’re only 20 per cent through this race and we’ve got a lot of racing left to do. It’s nice to have the point but it’s a small step in a big journey. It doesn’t change the overall standings currently, it doesn’t affect the positions of the other boats in the last leg, but later a point could be fairly big. But it’s only going to mean what we want it to mean if we sail well in the other legs.”

After the hearing, the seven skippers of the fleet turned their thoughts to the next leg to Sanya, China, which begins on Saturday (January 3).

Team Vestas Wind (Chris Nicholson/AUS) will not be contesting the 4,670 nautical mile (nm) leg which is one of the trickiest of the nine-month event when the boats negotiate their way through some of the busiest – and most polluted – waters in the world.

Nicholson told a press conference that his focus was now on returning his crew to the race for the closing legs – if possible.

First, the Volvo Ocean 65 boat, which was retrieved from a reef in the middle of the Indian Ocean last week after it ran aground, will be examined in Malaysia on January 1 to see if it can form the basis of a full rebuild.

“Everybody has recognised and seen what we’ve gone through and that’s given us hope for the future. We’ve got to use that hope to keep the programme moving. We’re in the middle of trying to work out if we can come back,” Nicholson said. “The Plan A is to be back and it always has been, that’s the ultimate goal.”