dongfeng race team29 sailing3991 vo 6583 Volvo Ocean Race1173
Fear of the unknown is one thing and being scared of what you know is another! For Kit, Horace, Wolf and Liu Xue, Liu... 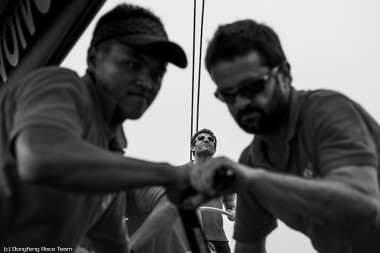 Hong Kong – Fear of the unknown is one thing and being scared of what you know is another! For Kit, Horace, Wolf and Liu Xue, Liu Ming and Yiran Zhang, the Chinese sailors on board Dongfeng, they have had their first real taste of what the Volvo Ocean Race can be like and it is scaring the hell out of them.

After 12 days at sea on the training leg from Sanya and with more rough conditions ahead, the Chinese crew relayed their fears to skipper Charles Caudrelier: “They are scared about the bad weather and afraid to be sea sick again,” reported Charles. “It is hard to realise from the outside and for someone who never sailed offshore, they have to understand there are going to be not easy moments… We will sail through a storm just before arriving in Hong Kong in the next few days. For sure they are not ready technically and physically to face such weather. But, honestly, it is totally normal. I went through the same thing when I started sailing offshore and my first transatlantic experience was not great… I almost gave up at that time.”

The Volvo Ocean Race delivers days, weeks and months of hardship, of ups and downs (literally!), good days and bad days and a rollercoaster of emotional highs and lows. But for the sailors who take on this challenge they know that to do the Volvo Ocean Race is one of the best sailing experiences in the world. Overcoming their fears will be another big test for the Chinese sailors who, unlike the professional western sailors, are having to go from novice offshore sailor to a proficient offshore sailor in just a few months so they can survive ‘life at the extreme’.

From on board Dongfeng it was a ‘good day at the office’ yesterday as Wolf and the crew took a fresh water ‘rain shower’: “So as many of you will know or have guessed by now the bathroom on a Volvo Ocean 65 is virtually non-existent! You don’t shower on board, at least not traditionally! The only water around you (apart from precious drinking water) is sea water, aka salt water. Really not the best kind of water to wash yourself with… It’s the small things in life, and let me tell you now, as in right now in my life, nothing would be better than a nice warm shower. Even a cold one… In fact just a shower. We’ve been offshore for 11 days and you do start to miss being clean. However, when I was cleaning the sink earlier, I suddenly heard there were some strange noises coming from the deck. Turns out that one of the sailors who knows meteorology very well was leading the Chinese sailors upstairs (on deck) to grab the soap and take off their clothes to get ready before the rainfall arrived. And a man of his word, sure enough after few minutes it started to rain. It was an odd sight really, some of them were taking a shower under the boom while ’singing in the rain’ or at least trying to! Our skipper Charles also asked the guys who had finished showering to take the helm so he could also joined this ‘shower party. Just another day in the office!”

Charles Caudrelier and his team on Dongfeng expect to arrive in Hong Kong around the 8th to 10th April, utilising these precious days at sea since changing course to Hong Kong instead of Auckland, capitalising on the new and fresh downwind conditions.

Follow the progress of the Volvo Ocean 65 Dongfeng via the tracker.