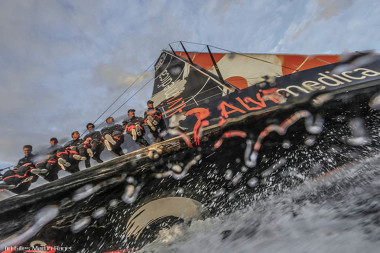 From the team’s temporary base in Portugal, they will put themselves through gruelling in-shore and off-shore training, as well as assessing candidates sailing skills, physical strength and mental discipline. Overall try-outs for the crew candidates will go on until the summer. Following that, the final crew will start to prepare for the world’s longest and toughest sporting event, the Volvo Ocean Race.

A total of 16 potential crew candidates including nationalties from the United States, Turkey, Italy, New Zealand and England, with an average age of 27 years old have been selected. The final crew selection is planned to be announced in July.

Alvimedica is a young and agile medical devices company with global ambitions fitting the scale and spirit of the prestigious Volvo Ocean Race, starting on 4th of October 2014 in Alicante, Spain and ending in Gothenburg, Sweden on 27th of June 2015, formerly known at the Whitbread Round the World Race.

“Sponsoring Team Alvimedica in the Volvo Ocean Race truly reflects our ambitions and values as a company, a team, and a competitor in the medical devices sector,” said Alvimedica CEO Dr. Cem Bozkurt “We are here to make our mark and get our name known around the world as developers of state-of-the art, ground-breaking medical technologies, and ready to take on the hardest of challenges from our competitors in our environment.”

Alvimedica develops minimally-invasive technologies for medical professionals looking for the next level of innovation in the operating room. The fast growing Europe based company has high ambitions as a challenger in the interventional cardiology field, with products to rival the long established North American market leaders.