lanzarote35 newport77 sailing3886 team sca11 Volvo Ocean Race1173
With less than five months to go until the start of the round the world Volvo Ocean Race, Team SCA has today set off... 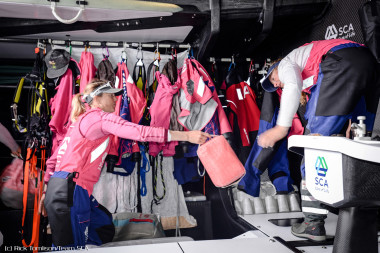 Newport – With less than five months to go until the start of the round the world Volvo Ocean Race, Team SCA has today set off on its second transatlantic passage, sailing from Newport, Rhode Island back to the squad’s training base in Lanzarote, Spain.

“For the past week we have been working on the boat, carrying out a few minor repairs and are now looking forward to getting our teeth back into the rhythm onboard! It has been a fairly busy ‘stopover’ in Newport and we seem to have managed to squeeze a lot into the week, including a visit to a local Elementary School and a satellite media tour with broadcasters and radio stations across the US. It has been great to be here and we are very much looking forward to coming back in a years time for the Race itself” commented Sally Barkow (USA).

Team SCA will be sailing with eleven crew onboard the boat, including navigator trialist Libby Greenhalgh (GBR) as well as Anna-Lena Elled (SWE), a new trialist Onboard Reporter. This is the same number of crew that will be allowed to be onboard during the race itself.

“The crew had a productive sail over and it was very satisfying, for them as much as for us, to see all the hard work over the past eighteen months come together. The sail back will be tougher, as the weather conditions will be slightly harder and it will be a lot colder, and will probably be a day or so longer. They will also only be eleven crew onboard, so that will bring with it a slightly different dynamic,” commented Brad Jackson, Team SCA Coach. Race rules allow the all-female team eleven crew for the Race itself and Team SCA will select these eleven from their squad of sailors.

The squad system, as in a lot of sport, helps the coaches to create a team that helps the overall development of the squad. “It is important that we have a wide range of skills across our team. In the 40-plus year history of the race there have only been four teams that have completed the race with the same crew onboard as at the start. We have therefore created a system that allows us have the flexibility to choose from a pool of talented, fit and race-ready sailors ensuring that we are prepared for any eventuality. This is a long and hard Race,” comments Joca Signorini, Team SCA Coach.

The team started from Fort Adams, Newport earlier today (Thursday), and is due to arrive into Puerto Calero, Lanzarote on May 28, 2014. The team will sail to a waypoint near Lisbon, replicating the course for Leg Seven of the Volvo Ocean Race, and then immediately on to the team’s base in Lanzarote.