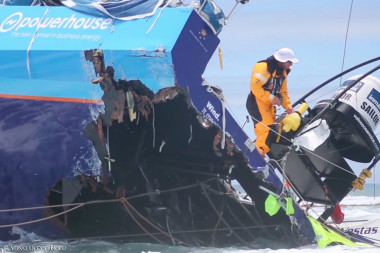 VOLVO OCEAN RACE, TEAM VESTAS WIND IS THINKING TO A NEW BOAT
Abu Dhabi – Team Vestas Wind is ‘exploring the opportunity’ of re-entering the Volvo Ocean Race with a new boat just over a week after their Volvo Ocean 65 ran into a reef in the Indian Ocean.

With their crew now safely on land, attention has turned to retrieving the stricken vessel, grounded on the Cargados Carajos Shoals (St Brandon), some 260 miles north east of Mauritius – and whether the Danish team will return to the race.

“It is Vestas’ clear ambition to get Team Vestas Wind out sailing again,” said the sailing team’s CEO Morten Albæk, at a press call in Abu Dhabi. “We’ll do everything within our means to make that happen.”

“That said, the assessment from all parties is that the boat can’t be repaired, and therefore one of the options we’re looking into is building a new boat,” added Albæk, who is also title sponsors Vestas’ Chief Marketing Officer.

“Whether that can be done, and done in a time which is meaningful for Team Vestas Wind to re-enter the race, is still to be concluded. We’re working closely together with Volvo Ocean Race on exploring that opportunity.”

Skipper Chris Nicholson (AUS), who led his crew in an early hours evacuation from the boat on November 29, and on to the remote island of Íle du Sud, where they remained for the next 48 hours before hitching a ride to Mauritius on a local fishing boat, echoed those hopes.

Seamounts
“Prior to the crash in the preceding 48 hours, Wouter and I in regard to our normal duties of looking where the boat was going with the routing, noticed that there would be some seamounts. When I saw those I asked what the depths and the currents and the wave conditions would be. Wouter’s reply was that the depths went from 3000m to 40m, (which) were the extremes of the depths, the current was negligible and we would monitor the wave state as we approached…”

Team Vestas Wind navigator Wouter Verbraak (NED) explained the reason for the accident to the media: “In hindsight we would’ve continued to zoom in on the area much more, on the electronic charts. Not doing so is the big mistake that I made, but the good thing is that we didn’t make any more.”

The incident happened around the midway point of the 5,200 nautical mile Leg 2 from Cape Town to Abu Dhabi of the nine-month round-the-world race which finishes in Gothenburg, Sweden, on June 27 next year.

Debriefed
It is Australian Nicholson’s fifth Volvo Ocean Race, and he and the rest of the crew have been debriefed by team and race officials over the weekend in Abu Dhabi and will shortly return home to their individual countries.

Volvo Ocean Race CEO Knut Frostad explained that, for the damaged boat, the recovery operation is still ongoing, and the parties involved are working together to bring about a swift resolution.

“We’re all making our absolute best efforts to do what is right. We have a very clear mission on this and that is to make sure that the absolute minimum impact is done to the environment. The plan is to remove the boat, either in its current form, or in a different form. We’re working on this right now, trying to make it happen as quickly as possible. Our next objective is to learn from this, and support Vestas, Powerhouse, and the team in their efforts to have a future in the race. I must underline that that is no small challenge. I don’t want anyone to have expectations that this will easily happen; it’s an enormous challenge. But the Volvo Ocean Race is all about enormous challenges – and here is another one.”

Patrick Lammers, a member of retail board RWE, said on behalf of sub-sponsors Powerhouse: “We are seeking opportunities to return to the race as soon as possible. In what form, and when, is impossible to say at this time, but all options are seriously considered.”