Rolex Fastnet Race, and they’re off

plymouth50 rolex fastnet race57 sailing3991
Giant crowds packed the Cowes and Western Solent shoreline this afternoon as a record-sized fleet of 356 set off on the 90th anniversary Rolex... 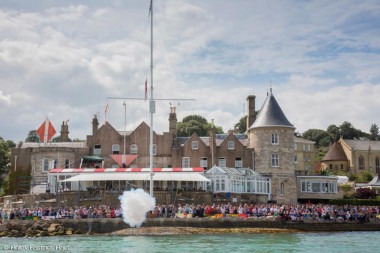 Plymouth – Giant crowds packed the Cowes and Western Solent shoreline this afternoon as a record-sized fleet of 356 set off on the 90th anniversary Rolex Fastnet Race, organised by the Royal Ocean Racing Club. With a complete lack of wind in the central Solent, the boats ghosted across the start line starting their 600 miles voyage to the Fastnet Rock and on to Plymouth with a whimper.

The most painful starts were the first two for the ‘non-IRC classes’ – the Multihulls at 1200, followed at 1210 by the IMOCA 60 footers, Class40s and Figaros.

The multihull line-up included the world’s fastest offshore race boat, Dona Bertarelli and Yann Guichard’s 40m trimaran Spindrift 2, and the impressive Multi 80 Prince de Bretagne, but with zero wind it was like the Formula 1 racing cars had run out of fuel. In fact it was American Lloyd Thornburg’s MOD70 Phaedo that made the best of it, but even with the tide turning and the wind eventually filling in, it still took her a lethargic 2.5 hours to cover the 10 miles to the Needles – at a MOD70 record low speed of just four knots.

The next starts were for the six IRC fleets that set off in ascending size order with IRC 4 first and IRC Z and the canting keel class last at 1340 BST. For the most part the boats at the island end of the line got away best, but had to make a costly tack across towards the mainland shore. The boats that started at the mainland ‘pin’ end, found themselves punching flood tide in no wind. Worst affected was the brand new IMOCA 60 Safran, which barely moved for at least 30 minutes after her start. In this fleet it was 2004 Vendee Globe winner Vincent Riou and Seb Col on PRB that were first through Hurst Narrows, with the Class 40 frontrunners not far behind, led by American Michael Hennessy’s Dragon on which British Olympic sailor Andy Beadsworth is calling tactics.

As an indication of the misery the faster boats faced in the first few hours – at Hurst Narrows, the leading IRC 4 boats were hanging on to the IMOCA 60s and Class40s.

At the start there was a major headache for IRC 3 and IRC 2 as the tide turned favourable but the wind had not filled in. Several boats were over early and then had to struggle back to restart. The most high profile victim of this was former Brewin Dolphin Commodores’ Cup winner and Fastnet race favourite Géry Trentesaux and his JPK 10.80 Courrier du Leon in IRC 3, who only managed to restart around the time IRC 1 was getting underway 40 minutes later.

By the time IRC Z, Canting Keel and the VO65 Team SCA got underway at 1340 the sea breeze had filled in from the northwest making for a starboard tack-favoured beat down the Western Solent. George David’s Rambler 88 nailed the run into the line to perfection but had Jim Clark and Kristy Hinze Clark’s 100ft Comanche on starboard above her, but not close enough to call water on as she approached the Island shore obstruction, Rambler had to perform two short tacks, and was rolled by the impressive Comanche who sailed away to a substantial lead. The sea breeze eventually got going as the fleet neared Yarmouth with the maxi yachts carving their way through the tightly bunched fleet. Comanche eventually passed through Hurst Narrows at around 1500 BST alongside Noel Racine’s JPK 10.10 race favourite Foggy Dew.

Forecast
While the forecast still remains largely light, according to navigator Ian Moore, it has improved slightly. While yesterday the northeastern tip of the Azores high was nosing into the Celtic Sea over Monday-Tuesday, today this has been replaced by a localised area of high pressure sitting over Cornwall. This is due to move south on Wednesday by which time, Moore says southwesterlies will be building along its northern perimeter.

While there has been talk about this year’s Rolex Fastnet Race being a ‘small boat race’ Moore reckons that now there is a chance for the bigger boats. “They might be able to make it into some southwesterly breeze out across the Irish Sea. Yesterday was showing was very little breeze in the Celtic Sea, but now there is a possibility of reaching in 5 or 6 knots of wind and the bigger boats are quite able to do 10 or 11 knots in that…”

According to 2011-12 Volvo Ocean Race winner Laurent Pagès, sailing on Frenchman Eric De Turkheim’s A-13 Teasing Machine, an equally big factor will be the arrival of a front in the Celtic Sea on Wednesday. Ahead of the front will be strong winds and according to Pagès if they can get around the Fastnet Rock just ahead of the front, they can stay in strong southwesterlies. “We have to be fast in the first part, which is why any slight improvement in pressure over the first two days will be crucial for us.”

In IRC Z, Derek Saunders racing his Farr 60 Venomous with a mixed crew of family, friends and paying guests was setting his targets low. “For us the big thing is to get past Portland Bill on the first tide. If we can do that… Normally we finish on Wednesday evening, but our plan this time is to finish before the weekend!”

On Cracklin Rosie in IRC 1, owner Steven Anderson was expecting to finish on Thursday morning… “which is a big improvement over Friday afternoon! It is very light, which is quite good for us as we are better in under 14 knots. There is wind, it is just not very consistent. If we can keep moving, we’ll be fine.”

All the way from Kiel, Germany is Claus Loewe racing his Judel Vrolijk designed 45ft one off Leu in IRC 1, with round the world sailor Boris Herrmann as navigator. Loewe said he was expecting to finish midday on Thursday, although he acknowledged this was pessimistic. Leu has been busy, racing in the Royal Yacht Squadron Bicentennial Regatta, Cowes Week and now the Rolex Fastnet Race. “We love it here – it is super here. Cowes is the mecca of sailing.”