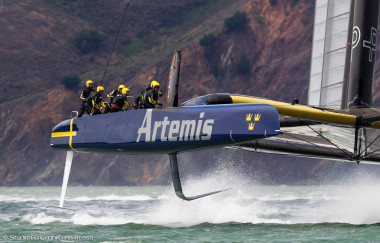 Alameda – Artemis Racing has signed designers Michel Kermarec and Thiha “Winnie” Win, who will join returning designers Adam May and Nico Rousselon, as the team prepares a possible AC35 bid.

“The America’s Cup is not just about innovative design or sailing talent, but about how they work together successfully,” said Artemis Racing owner Torbjörn Törnqvist. “We’re pleased to have Michel and Winnie join our team to help exemplify Artemis Racing’s collaborative spirit as we move toward the next Cup.”

Michel brings a wealth of experience to Artemis Racing, having served as a key member of Oracle Team USA’s design team during their AC33 and AC34 victories. He specializes in performance prediction and appendage design, and holds a PhD in hydrodynamics. Michel is a talented sailor, and represented France in the Soling class at the 1988 Olympics in Seoul.

Winnie has been involved in many high-profile advanced engineering projects all over the world in both marine and non-marine industries. After a very successful period in motor sport in the early 2000s, he turned his attention to America’s Cup yacht design in AC32, with Luna Rossa Challenge. Winnie was a key member of BMW Oracle Racing’s design team during their victorious AC33, and was part of Emirates Team New Zealand’s successful AC34.

On joining the team Winnie said: “We hope this next America’s Cup will be racing on foiling catamarans and continue to excite sailors, designers and general public alike. I’m extremely excited to be joining such a talented group of sailors and designers, and look forward to pushing myself to the limits to find success with Artemis Racing.”

Nico, a specialist in aerodynamics, graduated from Southampton Institute in 2004 with a BEng in Yacht and Powercraft Design, before specializing in Computational Fluid Dynamics with an MSc at Southampton University. In 2007, he integrated the Cape Horn Engineering (then CFD branch of Juan Yacht Design) to start the aero side of the company. His skills were further developed through two Volvo Ocean Race wins (Ericsson 4 and Groupama).

Adam competed for Great Britain at the Sydney Olympics in the Tornado class, and is an aeronautical engineer by trade, having worked for Airbus UK in their wind tunnel and design office. He was a technical coach for Team Origin and Skandia Team GBR, working closely with Iain Percy and Andrew Simpson during their successful 2008 and 2012 Olympic campaigns. Adam was part of the AC32 Victory Challenge team, before joining Artemis Racing for AC34.

“It is great to be back with Artemis Racing, and roll straight into things,” said Adam. “We are very fortunate to have attracted top designers like Michel and Winnie to our team and who share in our vision. I’m looking forward to working with Nico again as well, a young talent who I was fortunate to work alongside last time around.”

Artemis Racing continues to assess the criteria for the next America’s Cup, and is in the meantime building a winning team based on experience, talent and collaboration, and looks forward to making additional team announcements soon.