america2 America's Cup1429 coppa america1249
The competition for the oldest trophy in international sport, the America's Cup celebrates its 162nd birthday this week. 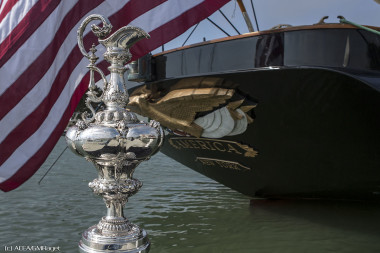 San Francisco – The competition for the oldest trophy in international sport, the America’s Cup celebrates its 162nd birthday this week.

It was August 22, 1851, when the yacht America beat the best of the British fleet in a race around the Isle of Wight, off the south coast of England.

The trophy won on that day was later donated through a Deed of Gift to foster “friendly competition between foreign countries”, and has represented the pinnacle of the sport ever since.

The winner (the first team to win 7 points) will advance to race Oracle Team USA, the current holder of the trophy, in the 34th America’s Cup Match beginning on September 7.