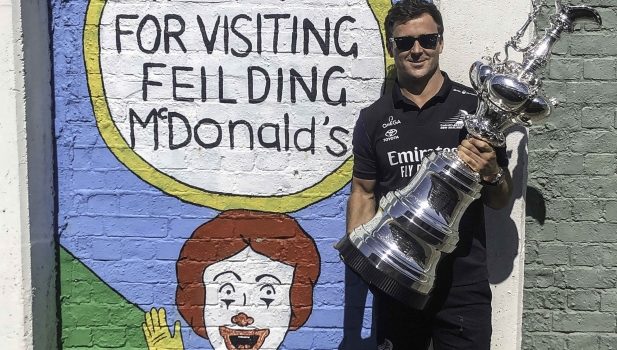 It was a proud occasion for van Velthooven to have the oldest trophy in international sport in his home town.“It’s pretty cool to be here today and see all of the locals turn up to see the America’s Cup in Feilding. There are a few familiar faces that’s for sure, but really this is a great example of why the team are partnering with McDonald’s, because it brings so many families together, and gives us an opportunity for us to connect with regular Kiwis throughout the country.”McDonald’s Feilding franchisee Dan Pitchforth was not surprised that word quickly got around that the America’s Cup was in town, “It really is a spectacular trophy, and to think where it has been and the history it embodies, and now it is in Feilding. You can see the look of amazement on the faces of all of our customers today. I am really proud Macca’s is backing Emirates Team New Zealand and having Simon and the trophy here today is a great example of the role we can play in the defence of the America’s Cup.”

Since winning the America’s Cup in 2017, Emirates Team New Zealand has been very clear in making sure the America’s Cup is not just an ‘Auckland’ event and realises that not everyone in the country will be able to come to Auckland to watch the event in person in 2021. So, it has been a priority to take the team and event to the regions on top of the free-to-air television and streaming across the country.“When we first met with Grant we quickly saw the benefit both parties could bring to each other,” said Jo Mitchell, McDonald’s Director of Marketing. “As the Official Family Partner to Emirates Team New Zealand, we see that our primary role is to help get families around the country behind the team. Our franchisees around the country are excited to be part of the team, and the biggest sporting event in New Zealand for the next few years.” McDonald’s sees around 1.6 million people every week and have 10,000 staff at 170 restaurants across New Zealand.Emirates Team New Zealand CEO Grant Dalton is proud to welcome McDonald’s to the team.“It is fair to say that I have been more than a casual ‘shopper’ at McDonald’s over the years, so it was great to have recently had a group of franchisees come into the base. They were really genuine New Zealanders, who were just so excited about the role they will all play in bringing the team and the America’s Cup to their local communities.”McDonald’s famous ‘Golden Arches’ will feature on the mainsail of the AC75 race yacht to be seen for the first time when ‘Te Aihe’ next sails at the first America’s Cup World Series event in Cagliari, Sardinia in April.

America’s Cup, a Dutch team is the sixth challenger
Add a comment