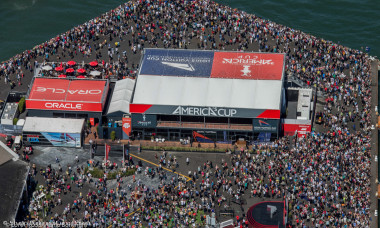 The City is suggesting the use of Piers 27-29 for the America’s Cup Park and Team Bases as well as Piers 19.5, 23, 31 and a section of Pier 80 for team use. A portion of Marina Green, including the Peninsula area, would be used for public viewing and bleachers. A significant change for this next America’ s Cup is shifting the team bases to the America’s Cup Park at Piers 27-29.

The teams, who found San Francisco Bay to be an ideal racing venue, welcomed the good news.

“As someone who is working hard to put together a new team, it’s critical for us to get the details of the next America’s Cup finalized quickly and the venue is a pillar for the whole event,” said Ben Ainslie, who was a critical member of the winning Oracle Team USA crew this past summer.

Ainslie, who is now working to build a new British challenge for this Cup, continued, “Everyone saw what a great arena San Francisco Bay was for the racing this summer and I hope we’ll soon see an arrangement that brings us back to San Francisco as soon as possible.”

Iain Murray, who ran the racing program for the 34th America’s Cup as Regatta Director and is now the CEO of Team Australia, the Challenger of Record, agrees: “We all saw what a fantastic venue San Francisco was for the racing this summer. The conditions, the natural amphitheater, and the enthusiasm of the people made for one of the best America’s Cups ever.”

Following the proposal from the Mayor, the City and the America’s Cup Event Authority will now work towards a comprehensive Host City agreement for the 35th America’s Cup, in San Francisco, in 2017.