ISAF Sailing World Cup Final, the event is on 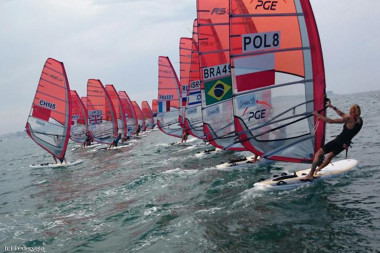 With a packed crowd of local dignitaries, VIPS and competitors, the ISAF President welcomed the world’s finest Olympic sailors and kiteboarders who will be battling it out on Abu Dhabi’s waters.

“It’s a great honour for me to be here today because we have a very important regatta which will be the future of our sport,” explained Croce, “We’ve been following a dream and a vision. The vision is to make the sailors part of the professional life and help them in this path.

“When we came here three or four months ago I never thought we might be able to put all of what you see in place. It’s been a miracle by the people working here who I thank very much. I am also thankful to all of you here today – we have 197 boats, 40 nations, 270 athletes and more than 20 Olympic medallists.”

Abu Dhabi Sailing & Yacht Club, host of the ISAF Sailing World Cup Final are utilising the star names competing at the regatta to highlight the sport of sailing within the Emirati capital. With Olympic heroes and World Champions in their numbers at the event local children are being inspired to take up the sport as Croce concluded, “It is a good legacy for the local people and the youngsters. I know some of you went around the schools showing the young people how our sport is developing. No better ambassadors could be found outside this group. I really think we have the first step for a future World Cup system that will really help all of you making a living out of sailing. As an old sailor it’s always been a problem so thank you very much for coming.”

Sailors’ attentions now turn to preparing their equipment for the battles on the race track. Practice racing will allow the sailors the first opportunity to test themselves against each other on 26 November. Racing commences at 12:00 local time on 27 November and concludes on 30 November.