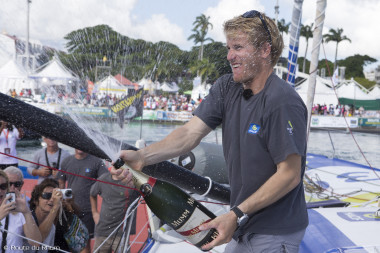 Point-A-Pitre – When he crossed the finish line off Pointe-a-Pitre, Guadeloupe this Friday afternoon to win the IMOCA 60 Class in La Route du Rhum-Destination Guadeloupe, François Gabart completed a vey rare back-to-back solo ocean double, adding the Route du Rhum solo Transatlantic to his 2012 victory in the Vendee Globe, the solo non stop around the world race.

Just as he won the legendary Vendee Globe at 29 at his first attempt, the youngest ever winning skipper, so today he also added the Route du Rhum title on his first time in the four- yearly solo race from Saint Malo to Guadeloupe.

Remarkably just four years ago he was in Guadeloupe to greet and help Michel Desjoyeaux. In the intervening period he launched his IMOCA 60 project, sailed only three solo races and won all three.

The only other solo sailor to have sailed to successive wins in the Vendee and the Rhum – the pinnacles of solo ocean racing – is Michel Desjoyeaux, who was Gabart’s original mentor and project manager.

Gabart’s twin peaks are distinct from his friend and teacher’s in that Desjoyeaux won the 2000 Vendee Globe in the IMOCA and then triumphed in the 2002 Route du Rhum outright sailing the ORMA trimaran Geant.

But Gabart becomes the first to win the two big IMOCA prizes back-to-back in the same boat. And today after breaking the 2006 course record of Roland Jourdain – setting a new mark at 12d 4h 38m 55s – he also owns both the Transatlantic record for this 3542 miles course and he course record for the solo global circumnavigation (78d 2h 16m 40s)

Having conquered the round the world and Transatlantic courses at the first time of asking this was his last race on the IMOCA 60 which has carried him to victories. He will step up to a new 100 foot trimaran which will be launched next year in the colours of Macif, who he has been with since 2011, and pursue ocean records and races, likely to include this Route du Rhum-Destination Guadeloupe.

Although he was pushed hard through most of the race by Jeremie Beyou (Maitre Coq) – his training and sparring partner from the elite Pole Finisterre racing group based from Port-La-Foret in Brittany, Gabart proved to have a consistent edge in speed in the fitful trade winds conditions, despite the fact the two boats are near idenitical twin sisters from the VPLP/Verdier partnership.

Indeed the Macif-Maitre Coq vanguard of the IMOCA fleet this Route du Rhum in many ways mirrored that of the Vendee Globe when Gabart and Armel Le Cleac’h raced around the world as if attached by bungee elastic. Beyou’s boat Maitre Coq was formerly Le Cleac’h’s Banque Populaire. Gabart was 90 miles ahead of Beyou before the final passage round most of the island, by the finish that had been compressed closer to 45 miles.

Gabart’s Route du Rhum was carefully modulated. He proved on the Vendee Globe that he is an innately fast, confident and hard driving skipper, belying his tender years in the class. This time he lead since Cape Frehel just after start line on Sunday November 2nd and was never passed.

Gabart’s Race
After less than 24 hours racing he was already 3 miles ahead and in control of a pack comprising Beyou and 2004-5 Vendee Globe winner Vincent Riou and Marc Guillemot. Riou was a closer contender before he had to retire with structural damage to his mainsheet track while a combination of small problems hobbled the challenge of Guillemot (Safran) who finished third in 2010. South of the Azores, Beyou cut the corner back to the north-west and closed the gap to less than 20 miles, but Gabart was able to extend on the SW side of the Azores high when he manouvred into bettter breeze and progressively opened out on each position report.

There is an element of catharsis too for Gabart, who one year ago lost the top of Macif’s mast when leading the two handed Transat Jacques Vabre with Michel Desjoyeaux.

Aside from being here in Guadeloupe in 2010 to meet Desjoyeaux, the last time Gabart was on the island was as a seven year old around the same time as Florence Arthaud became the first woman to win the race.

François Gabart originally studied and become an engineer at a top school in Lyon, but his heart was always in sailing. At the age of 7, he sailed away for a year with his family stopping in the Canaries, Cape Verdes, French West Indies, the States… a part of his childhood which clearly left its mark. From a racing background in small dinghies he moved to and Olympic campaign in the Tornado class.

In just two years in the Figaro circuit, he was top rookie in 2008, came third in the Cap Istanbul, and third in the BPE Transatlantic race 2009. In Oct 2009, he was chosen as Skipper Macif winning a national talent selection. Second behind Le Cléac’h in the 2010 Solitaire, he won the Cap Istanbul and became French offshore racing champion.

Gabart’s star remains very much on the ascendancy, a very rare talent in ocean racing.

First words: “This is huge. It is the Route du Rhum, it is not just nothing. I pushed myself like never before to win this. Now I am happy with the result and how I got there. The project was launched just four years ago. I raced round the world and won and now this. I could not do better with this boat. We have done only three races together and won all of them (ed’s note: 2011 BtoB Brasil to Brittany, Vendee Globe, Route du Rhum). But this is the end of our life together, we have done some beautiful things. I wanted to live this Route du Rhum with the same emotions, the same feelings and the Vendee Globe. I really enjoyed myself. It is a beautiful thing racing alone. I am still learning. As for the record? Well times change and technology changes and I don’t think it is interesting to compare the times. But I have to say that if someone had told me when I was here four years ago that I would have done this, I would not have believed it. It is not because you think it is easy that it becomes so, but because it is not, on the contrary it is hard. I set myself a very high level. And it is about the personal challenge of that. I set the bar high and so I was sad when Vincent dropped out. I should have been happy, but I was disappointed. We would have had a good fight and pushed each other. I did not think for ten seconds that Jeremie was just behind me. I just built the margin over three days. I have a great sensation, a great feel for the boat and spent a lot of time at the helm. I could feel when it is good, when the stack was right, when the sail combination was perfect, when there was weed on a rudder. I lost my big spinnaker at the Azores just after the passage of the front. So I had not choice than to be faster that Jeremie. This last bit I did savour the feelings. And now it is sad to leave this boat. But in four years I will be back here in a Multi.“