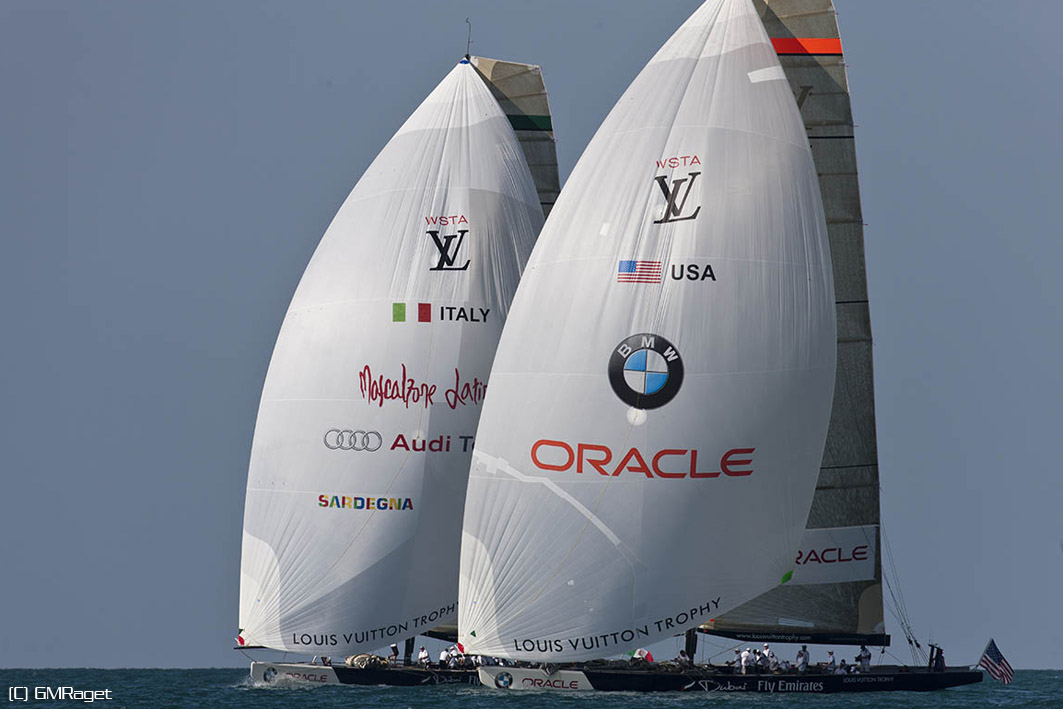 Racing against each other twice, each team won once and lost once. It was a pattern repeated in all but one of the other pairings, leaving the leaderboard bunched in the middle.

With just one match remaining in the first round robin, BMW Oracle Racing is unassailable at the top of the leaderboard with nine points. After that, the fleet is tightly grouped with just half a point separating the next four boats. Emirates Team New Zealand is in second place with 4.5 points. Sweden’s Artemis Racing, Synergy Russian Sailing Team and the French/German team All4One remain third-equal on four points. Italy’s Mascalzone Latino Audi Team is sixth with two points.

Only Artemis Racing and Emirates Team New Zealand have a chance to improve their standing. They will race tomorrow in the final match of the first round robin. A victory for Artemis would see them overhaul the Kiwis to take over second place.

Racing in round robin two will begin following the Emirates Team New Zealand vs Artemis match. In the second phase of the regatta, each team will sail the other just one time, but a victory is worth two points. The top four teams at the conclusion of round robin two will advance to the semi final.

Kevin Hall, navigator for Artemis, is looking forward to the last race of the round tomorrow against Emirates Team New Zealand.

“What we’re seeing out here is very good racing so we were happy to go one and one. All the teams are going to have to be happy with one and one by the looks of it. It’s tough racing and the teams are close.”

Jochen Schumann, three-time Olympic gold medalist and skipper of All4One had praise for his team’s win against Artemis after fighting off multiple attacks in their second race.

“I thought our strategy and our teamwork was good,” he said. “Obviously all the teams are getting better day by day. We’re all getting ready for what’s to come. Next round robin it will be two points for a win, so that will make a difference.”

Ray Davies, tactician for Emirates Team New Zealand, said that their one win and one loss came down to what happened in the starts. “We were over in the first and gave Synergy a big jump. In the second race we pushed them over at the start. It was great work by Dino and we got a big lead out of that and we only had to cover them for the rest of the race.”

For every one of the Louis Vuitton Cup matches, a VIP guest sails aboard as the 18th man, riding in the back of the boat, right behind the skipper and experiencing the tactics and action up close.

Although not a sailor, it’s not the first time he’s sailed on a Cup boat. “I sailed on the Hauraki Gulf in New Zealand in 1992 and it was cold and wet and windy,” he recalled. Dubai conditions were not the only difference. “I got stuffed in Auckland. I got put on grinding duty. I didn’t make that same mistake today. I very quietly declined.”