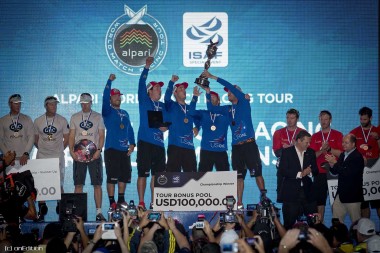 Joining the race for the 2014 title is also one of the challenging teams for the 35th America’s Cup, Luna Rossa.

Francesco Bruni will represent Prada CEO Patrizio Bertelli’s long term America’s Cup challenger Luna Rossa. Bruni, a former Laser, 49er and Star class Olympic sailor, was tactician aboard the Italian team’s AC72 catamaran in San Francisco during the 34th America’s Cup last year. He has now stepped into the driving seat for their match race training. Bruni competed at the Argo Group Gold Cup in Bermuda in 2013, when he triumphed over Sir Ben Ainslie in the final.

“The participation in the Alpari World Match Racing Tour is part of team Luna Rossa’s preparation program for the 35th America’s Cup,” confirms Bruni. “The Tour is one of the most selective competitions at international level and is the best field to measure ourselves in a real race.”

The 22yr old match racer is no stranger to the Alpari World Match Racing Tour after competing at the Monsoon Cup in 2012 and 2013, and the Korea Match Cup 2013. He was also winner of the ISAF Nations Cup 2013 and is a two-time winner of the Warren Jones International Youth Regatta in Perth.

“I am really proud to be racing on the 2014 Tour as a first time card holder,” commented Gilmour. “It has been a major goal of ours to win the Alpari World Match Racing Tour and it’s a tough field this year, but I believe I have the right team with me that can really challenge for the world title.”

Gilmour has recently joined Team Australia representing the Challenger of Record for the 35th America’s Cup. He will be dividing his time during 2014 between competing on the Alpari World Match Racing Tour and training with Team Australia.

All eight Tour Card Skippers are automatically guaranteed a berth at the six Tour Championship events for 2014. At least an additional four skippers are selected by each event to make up the final team tally.

But the man to beat in 2014 will be defending champion, US Virgin Islander Taylor Canfield. His USone Sailing Team won the Chicago Match Cup in 2013 and a third place at the Monsoon Cup was enough to secure the 2013 Alpari World Match Racing Tour overall and the World Championship title.

“USone is extremely happy with our 2013 performance as a first time Alpari Tour card holder. We have a special and talented team, which will remain the same for 2014. However, with new teams and new events, it’s a clean slate and the standards are high. We will be competing with the same enthusiasm and drive to retain our title.”

Wanting to claim Canfield’s title more than anyone this season will be British match racing legend Ian Williams. The GAC Pindar skipper has won the Alpari World Match Racing Tour four times (2007-8 and 2011-12). Victory this year would see Williams better Australian Peter Gilmour’s record and enter the record books as the person to have the most Match Racing World Championships in the history of the sport.

Williams comments: “Team GAC Pindar are very much looking forward to the 2014 Alpari World Match Racing Tour season. It is great to see new Events coming onto the Tour and I am especially looking forward to going back to Poland for the first time since we won the Sopot Match Race in 2005.”

A familiar foe of Williams, who has been awarded a Tour Card this season, is France’s Mathieu Richard, back for an impressive 11th year on the Tour. Richard won Korea Match Cup last year, when his GEFCO Match Racing Team concluded the season seventh overall.

For Sweden’s Bjorn Hansen’s this will be his eighth year on the Tour. His eWork Sailing Team finished just off the podium in fourth place last year, following their second place in 2012.

Back for his seventh consecutive year competing at Alpari World Match Racing Tour events, and his third year as Tour Card Skipper, is Australian Keith Swinton and his Black Swan Racing Team. Swinton finished sixth on the Tour last year, down two places from their 2012 position – their best to date.

Phil Robertson will be once again representing New Zealand with his Waka Racing Team. This will be his sixth year on the Tour having finished third last year and in 2012.

As AWMRT Executive Director James Pleasance commented: “We have a fantastic line up on the Tour this year, testament to the level of professionalism the World Championship has now reached. We are also delighted to welcome Luna Rossa to the 2014 Tour as part of their training for the 35th America’s Cup. While the America’s Cup has moved to foiling catamarans, there is no better place for the teams to hone their match racing skills than the Alpari World Match Racing Tour.”

For more information on the Tour Card Skippers for 2014, and to follow all the action from the season opener event at Match Race Germany from 5-9 June, visit www.wmrt.com.