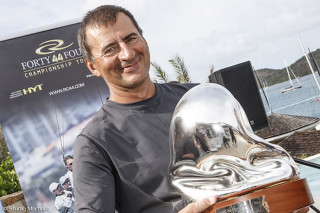 Virgin Gorda – Artemis Racing today won the fleet racing at the RC44 Virgin Gorda Cup, with a four point margin over Peninsula Petroleum, having led from the outset of the four day regatta. But while this was close, the outcome of the 2015 RC44 Fleet Racing Championship was closer, only decided in the last seconds of the final race, followed by some intense mathematics and the breaking of a tie.

Torbjörn Törnqvist’s Swedish team put in a late charge this season, posting four bullets this week to achieve their first RC44 victory since the Austria Cup in 2012.

“It wasn’t the prettiest day for us, but we were very close to winning two races,” said Törnqvist. “We were leading the last race and then I don’t know what happened! I’m very happy of course, needless to say.”

Perhaps the reasons for Artemis Racing‘s success were down to Törnqvist having arrived a day before the regatta to train or new tactician Francesco Bruni making his mark. Törnqvist explained: “We have great sailors on board, and here it’s been the small things. It has also come down to my helming – I was focussed a lot, which was a big difference this time.”

2015 RC44 Fleet Racing Championship
The 2015 Fleet Racing season for the one design 44 footers became a two horse race between Vladimir Prosikhin’s Team Nika and Vladimir Liubomirov’s Bronenosec Sailing Team. The two teams had either won or come second in the two previous events and, in the championship, Team Nika was one slender one point ahead of her rival going into the RC44 Virgin Gorda Cup.

This morning in the RC44 Virgin Gorda Cup, Bronenosec was lying third, one place ahead of Team Nika, but needed another boat to finish the regatta between her and Team Nika to win the Championship. Initially this seemed all but impossible, but in today’s first race, the two leaders, Artemis Racing and Peninsula Petroleum, finished last. This left Peninsula Petroleum still second but now only three points clear of Bronenosec. This margin narrowed further to two points going into the day’s third and final race.

Team Nika’s tactician Ed Baird explained their situation going into the last race: “There were five boats which could finish between us – that was bad. We had to manage that around the course, in an incredibly shifty, crazy venue…”

Against the odds, at the final weather mark rounding of the deciding race, Bronenosec was in a Championship winning position: Leading, with Team Nika in second and Peninsula Petroleum in fourth. However on the last run a squall rolled over the fleet and with gusts of 30 knots on one side of the course and nothing on the other (where the leaders were), the positions were overturned.

As Bronenosec’s Italian tactician Michele Ivaldi explained – on the final run they had fallen into a hole as the squall passed through. “We got a big header, so we kept going on starboard and Team Nika came with us. Instead we should have just gybed and gone to the other side, but there was no way we could do that. It was the wrong cloud at the wrong moment.”

On the championship leaderboard this left this Bronenosec Sailing Team and Team Nika tied at the top, but with Team Nika claiming the title – the tie split through her having scored a better result at the RC44 Cascais World Championship.

On returning to the Yacht Club Costa Smeralda, Prosikhin was ecstatic: “I have been in the RC44 class for almost five years. It’s been a gradual climb. Last time we were here I was last – my lowest point. So this really means a lot to me. I am very happy to win this season.”

For the final races, Prosikhin admitted that he’d had his head down, focussing on helming and not broaching. “It was only after we’d finished that they told me we had won the season. This regatta has been the most difficult I’ve done for sure.”

His tactician Ed Baird paid tribute to the Team Nika crew: “As the new guy on the boat, I am really impressed with how these guys are sailing. The only reason we didn’t finish stronger in this regatta was due to decisions I made – never with the driving or sailing the boat or boat handling. Everything was crisp and beautiful – it is a pleasure to sail with the team.”

Bronenosec Sailing Team leaves Virgin Gorda having won the rolling season’s Match Racing Championship and on the same points as the Fleet Racing winner. “I am very happy my friend won,” said Liubomirov of his rival on the water. “But to have lost in a situation like this, in the last 30 seconds of the race, is very painful.”

Cameron Appleton, tactician on 2014 RC44 Champion Team Aqua summed up: “It was a phenomenal year of racing, truly a hard season, a hard-fought win for Nika and huge congratulations. We know what it feels like and we’re proud that someone else has sailed so well to accomplish what they did.”

The 2016 RC44 Championship Tour will be announced imminently, but will start in Bermuda and, for the first time, will visit the UK.