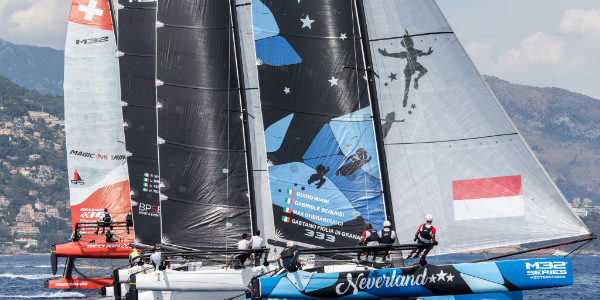 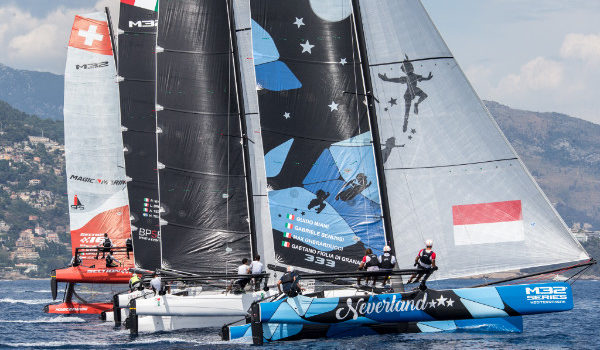 m32 series mediterranean4 sailing3991
Very tight fight on this third day of the super fast M32 catamarans racing in Montecarlo. After yesterday's no racing due to bad weather...

Monaco – Very tight fight on this third day of the super fast M32 catamarans racing in Montecarlo. After yesterday’s no racing due to bad weather conditions, a light breeze has opened the day. These races are part of the M32 Series Mediterranean, that started with the Grand Opening Event in Portovenere a month ago and will be going next to Riva del Garda (19-21 August), Genoa (23–25 September) and concluding in Ibiza (6-9 October).

Today’s light south-southeastern breeze and flat sea, has allowed races to start at 1pm for a total of 12 races. With the race course set a few meters off the shore, catamarans have performed a pure racing show with many people watching ashore and on the water.

On the terrace of the Yacht Club de Monaco people have been entertained by Mediaset Sport journalist Stefano Vegliani commenting the show while on the water many boats have watcheed in the vicinity of the race course.

Super fast and spectacular races each flight lasting 15minutes. Top level sailors on the water and great fun on the dock for the monegasque audience used to top-notch events this time very curious and present assisting races.

Last night boat-owners, sailors and other guests were invited to a luxurious gala dinner hosted on the upper deck of the Yacht Club de Monaco.

The M32 catamarans are now ready for the next thrilling challenge in Riva del Garda with a few more boats to enter the event.

Sailing and multihulls, a full season for Spindrift 2

Louis Vuitton ACWS, the Trophy will return in New York

M32 Series, the Battle of Helsinki won by Team US One
Add a comment