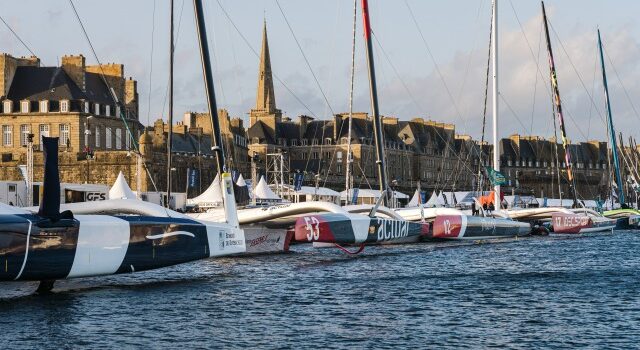 Route du Rhum89
The Route du Rhum-Destination Guadeloupe which starts on Sunday from Saint Malo is set to see a record 138 boats spread across six classes,...

Point-a-Pitre – The Route du Rhum-Destination Guadeloupe which starts on Sunday from Saint Malo is set to see a record 138 boats spread across six classes, Ultim 32/23, IMOCA, Ocean Fifty, Class40, Rhum Multi, Rhum Mono. They will set off on Sunday November 6 at 1:02 p.m local time on a course of 3,542 miles (6,500 km) to Pointe-à-Pitre in Guadeloupe.

Rarely has the Route du Rhum – Destination Guadeloupe had so many contenders for victory and podium positions. Here is a quick guide to the key contenders

Ultim 32/23
Veteran Francis Joyon is looking to defend his title on an Ultim which has won the race three times in succession but in light of the strength of the new flying, foiling Ultims it seems unlikely Maxi Edmond de Rothschild is the logical favourite after dominating all the key races for the last three years. The Verdier design is highly optimised and Volvo Ocean Race winning skipper Charles Caudrelier knows his craft perfectly.

“The boat no longer has the advance that it had in 2018 but we continued to develop it and the new foils are a success. I’m confident.” Says Caudrelier.

But there are three strong rivals in Armel Le Cléac’h (Maxi Banque Populaire XI) who capsized four years ago on his previous Ultim and had to be rescued. He has a very fast allrounder of a boat and it has shown great potential. And Le Cléac’h is keen to add the missing title to his CV. Thomas Coville (Sodebo Ultim 3) saw his last two Rhums severely compromised but his boat is a little off the pace compared to the newer ones, but he too is comfortable pressing a boat he, too, knows very well. And François Gabart came so close in 2018, being eclipsed in the final miles by Joyon who won by seven minutes after seven days of racing. Gabart might feel stressed as his daggerboard was damaged on the delivery to Saint Malo.  But he is a wily, smart, fast competitor who wants to win and has a boat to deliver that victory.

Ocean Fifty: an open fleet
No one in Saint Malo wants to be considered favourite. It’s like the poison chalice. The smart money in France is on Brit Sam Goodchild and his well proven Leyton,  “Of course I have the potential to win, I did everything to be here in the best possible condition, but I’m not the only one.” He says, “Armel (Tripon) won four years ago, Erwan (Le Roux) won in 2014 and he has a new boat that goes fast, Thibaut (Vauchel Camus) knows his boat by heart and he is not afraid, Sébastien (Rogues) won the Transat Jacques Vabre 2021 and it was he who set the pace for the Dhream cup, Eric (Péron) has a great boat of breeze and Quentin (Vlamynck) is the winner of the Pro Sailing Tour this year…” assesses Goodchild sagely.

IMOCA: 38 boats, three levels
There are seven new boats launched in 2022: Kevin Escoffier (Holcim – PRB), Maxime Sorel (V and B – Monbana – Mayenne), Jérémie Beyou (Charal), Boris Herrmann (Malizia – Seaexplorer), Sam Davies (Initiatives-Coeur), Yannick Bestaven (Maitre CoQ V) and Paul Meilhat (Biotherm). But though their boats have great potential most observers consider they are too young and unproven to be really pushed hard by their skippers for whom this race is mostly a learning mission.

“In my opinion, Charlie Dalin and Thomas Ruyant are in the best position with their super well proven very reliable IMOCAs. Especially Dalin who won everything this year and who even beat fully crewed boats (on the Azimut Challenge, editor’s note). It’s beautiful to see.” Says Germany’s Boris Herrmann, ”There is a risk that not all new boats will finish into Guadeloupe because of teething problems. I really don’t want to be part of the battle but want to get there. The weather is not looking easy, it is going to be a real adventure.”
Jérérmie Beyou (Charal) and Louis Burton (Bureau Vallée) are tipped as potential podium finishers.

Class40: Open season
There are 55 Class40s and the podium has never been so open. There are ten possible winners “But there are so many outsiders around that anything is possible. It’s a pity that betting is not allowed,” points out Halvard Mabire, the president of the class. There are now no fewer than 30 scows in the fleet. “Two-thirds of the very many new boats are sailed by very, very talented skippers.” confirms Antoine Carpentier (Redman). Last edition’s winner Yoann Richomme (Paprec – Arkea), stresses that “the parameters that have to be taken into account are so numerous that there is no magic formula to decide who the top contenders might be.”

A double winner of the La Solitaire du Figaro, Richomme is in pole position to defend his title but has a bunch of ex Figarists armed with great boats that he will have to contend with. Among them Xavier Macaire (Groupe SNEF) and Corentin Douguet (Queguiner-Innoveo). There are also 23 sailors who cut their teeth in the Mini650 including Ian Lipinski (Credit Mutuel), Luke Berry (Lamotte – Creation Module), Ambrogio Beccaria (ALLAGRANDE PIRELLI), Axel Trehin (Project Rescue Ocean), Amélie Grassi (La Boulangère Bio).

Mono Rum: Jean-Pierre Dick is the favourite
All eyes will be on Jean-Pierre Dick and his Verdier design (Notre Mediterranean – City of Nice). After four Vendée Globes, two victories in the Barcelona World Race, four in the Transat Jacques Vabre in IMOCA, the Niçois returns here with big ambitions on a race that is missing from his CV.

Rum Multi: An historic re-match between the legends
With his famous old Orma 60, Philippe Poupon (Flo) has, on paper, the best of the Rhum Multi fleet. But for this former winner, the primary objective is “to get to the end and tell a great story.”

“Of course I am not the only one to aim for victory,” confirms Marc Guillemot (METAROM MG5). Quite a few skippers arrive with similar boats are in this mix including four Multi50s (Interaction, Trilogik – Dys de Cœur, Rayon Vert, Ille et Vilaine Cap vers inclusion) should be among the front runners.