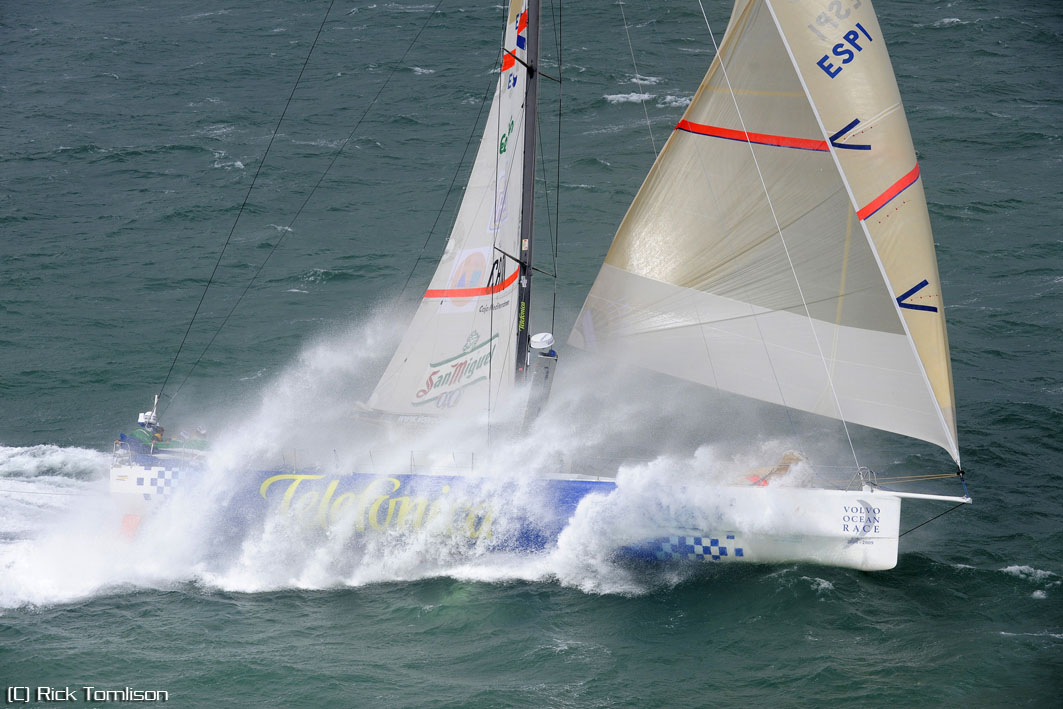 VOLVO OCEAN RACE, TELEFONICA RETURNS TO THE RACE
[Volvo Ocean Race Press Release] Telefónica is back for the third consecutive edition to take part in the Volvo Ocean Race. The company will do so with a boat called  Telefónica which is undergoing construction at a shipyard in Valencia, Spain. The Spanish Volvo Ocean Race 2011-12 team will include a latest generation yacht and an expert and competitive crew, aspiring to win this prestigious challenge.

Knut Frostad, CEO of the Volvo Ocean Race said: “I am delighted to have an internationally prestigious company such as Telefónica in the Volvo Ocean Race for the third consecutive edition. We welcome them back and we look forward to continuing to develop this great event together both on and off the water.”

Team Telefónica‘s presence in the Volvo Ocean Race, headed up by Pedro Campos, CEO of Team Telefónica, is part of their broad promotional programme in the sailing world, both on a national and international level. As well as a podium position in the last edition of the event and victory in the in-shore races in the Volvo Ocean Race, their trophy cabinet is host to 15 world titles, two gold and one silver Olympic medals from the Olympic Games in Athens 2004 and Beijing 2008.

The team will be made up of a group of specialists, requiring expertise across all of the key areas: racing crew, shore crew, sails, meteorology, physical training, nutrition, communications, logistics and administration.

In the area of physical training, the team has the support of Spain’s Sports Council, an organisation they have signed a collaboration agreement with relating to training and sports medicine, with the backing of the Spanish Royal Sailing Federation (RFEV).

The Volvo Ocean Race CEO also highlighted that: “The level of the five teams signed up so far for the next regatta hasn’t been this high in the 38 year history of the regatta,” said Knut Frostad. “No expert is able to predict who’ll win among these five teams. It is going to be a veritable oceanic clash of the titans!”

The offshore regatta par excellence
The Volvo Ocean Race is the most prestigious and the most demanding of the offshore regattas. It represents a human, logistical and technological challenge in which man’s spirit of adventure, the struggle against the elements and latest advances in technology take on a special force. Resistance, will power, excellence and bravery are just some of the shared characteristics of those who take on this challenge to face the unknown, with the desire to reach far away places, in the first place, forming part of a great human team, the real stars of an adventure with almost 40 years of history behind it.

Pedro Campos, the CEO of Team Telefónica has said that: “The Volvo Ocean Race is the most important offshore race in the world and along with the America’s Cup it is one of the only two regattas among the ten most watched sporting events in the world. The Volvo Ocean Race is probably the longest, hardest and most difficult and extreme of any sport and just taking part in it means a great challenge for any country.”

Knut Frostad said “We are on the way to achieving our aim of increasing our worldwide coverage in the media, following what were great results in the previous edition of the Volvo Ocean Race, with the regatta watched on over 200 channels across the world, with a total audience of some 1.3 billion viewers.”

As well as the offshore legs, in this edition of the Volvo Ocean Race there will also be ten in-shore races, with racing close to shore and action and power guaranteed.

Telefónica and the Volvo Ocean Race
The Telefónica sponsorship objectives and philosophy tie in perfectly with the Spanish round the world sailing team. Principally there is the connection between values of teamwork, technological development and cutting edge innovation.

Telefónica‘s relationship with sailing began in 2000 and has reached right up to the top level, represented by this third participation in the Volvo Ocean Race.