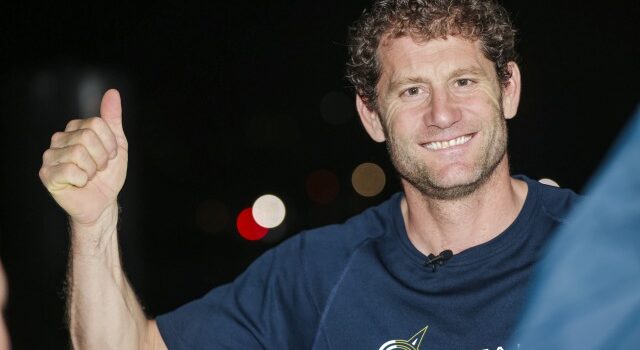 Point-A-Pitre – In the dark of a Caribbean night to a typically rapturous welcome, French solo skipper Charles Caudrelier on the Ultim 32/32 Maxi Edmond de Rothschild crossed the line off Pointe-a-Pitre, Guadeloupe at 05:02:05hrs local time (09:02:05 UTC) this morning. His was the first boat to finish the 12th Route du Rhum-Destination Guadeloupe, the legendary 3,542 nautical mile solo Transatlantic race, which started off Saint-Malo, northern Brittany last Wednesday at 1415hrs.

Upon crossing the line, Caudrelier paid tribute to his team and family: “I’m not even tired. The first 24 hours were hard. I so wanted to win the race for the team. I’ve been dreaming of it since I was young. It’s for the family Rothschild. It seemed like a crazy idea, building a boat that could fly. It’s for Franck Cammas, as he had the experience. Without him I wouldn’t be here. He left me the place for the Rhum. He could have won it himself. It’s a Formula 1 team and I just drive in the race. This is a team effort and there’s also Guillaume Verdier, the designer. I recently lost my mother and she isn’t here to share this moment. Thanks to everyone for believing in me.”

Racing his first ever solo multihull race on a giant Ultim 32/23, the hugely experienced Caudrelier held his cool through a nervous final night on the course, during which he spent long periods slowed to two or three knots as he negotiated calms in the lee of Gaudeloupe’s volcanic Basse Terre island.

The 2017 launched Maxi Edmond de Rothschild is the flagship of the French banking family’s Gitana team, and is acknowledged as the most evolved and reliable boat in the Ultim 32/23 class. Caudrelier now adds the highly coveted Route du Rhum-Destination Guadeloupe title to a winning record across all the major Ultim 32/23 offshore and ocean races.

François Gabart, the runner up in 2018 who had victory wrested from his grasp by Joyon in the final miles of the race, is on course to finish second and was around 30 miles behind when Caudrelier crossed the finish line.