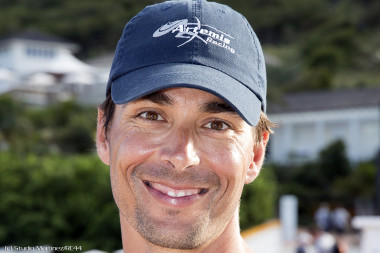 Alameda – Artemis Racing announced today that it has secured the signature of Danish sailor and former Team Origin trimmer, Christian Kamp, as the team prepares for a possible 35th America’s Cup bid.

Christian was part of Luna Rossa Challenge for the 32nd America’s Cup in 2005 before joining Team Origin in 2007. For three years he campaigned with Iain Percy in the Louis Vuitton Pacific Series, TP52 and the World Match Racing Tour, winning the World title in 2010. In recognition of his achievement, he was awarded 2010 Danish Sailor of the Year. Kamp’s career highlights include three world championships, one European and three national titles, as well as more than 20 Grade 1 Level wins in match racing. More recently he sailed on board Team Aqua as trimmer in the RC44 circuit, winning the last three consecutive seasons.

On joining the team Christian said: “I’m very excited to be joining such a talented team as Artemis Racing. It’s great to be united with old team mates such as Iain Percy, Adam May, Chris Brittle and Thiha “Winnie” Win, but also to have the opportunity to sail and work with some of the biggest natural talents in our sport in Nathan and Goobs.”

Christian has met up with the team this week in the British Virgin Islands for the RC44 Virgin Gorda Cup, the first event of the 2014 RC44 Championship Tour.

Christian is joined by former Oracle Team USA team member Richard Kent who will bring his expertise leading the Electronics unit. Kent is no stranger to the America’s Cup having competed in the last four, winning the 33rd edition with BMW Oracle Racing in 2010 and successfully defending in San Francisco last summer. Richard also ran the electronics departments for winning Volvo Ocean Race teams ABN Amro (2006/2007) and Ericsson Racing (2008/2009).

Artemis Racing is also delighted to welcome back Chay McIntosh, who served as Shore Team Manager in the last campaign. Chay has found success throughout his career, winning the 29th and 30th America’s Cups with Team New Zealand, and the 2008/09 Volvo Ocean Race with Ericsson Racing.

Iain Percy commented: “We continue to build our core team and have been working hard on securing the right people. I am very pleased to have Christian, Richard and Chay with us for the next cup; as I am sure each one of them will contribute with their talent, passion and expertise to reaching our goal. We have a very talented group from the previous challenge, but we have also been able to reinforce that experience in a number of key areas; making us much stronger. It has also been great to recognise our recent recruitments throughout the various areas of the campaign, as all contribute significantly to the end result.”

Artemis Racing announced earlier this month that it had secured the first phase of designers for the 35th America’s Cup with Michel Kermarec and Thiha “Winnie” Win joining returning designers Adam May and Nico Rousselon.