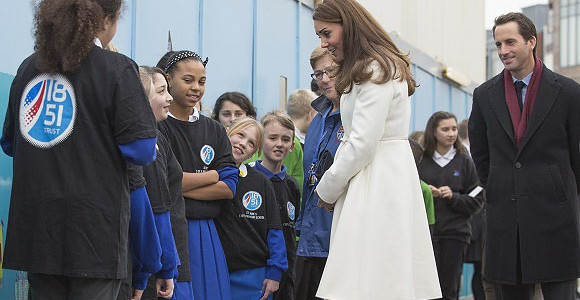 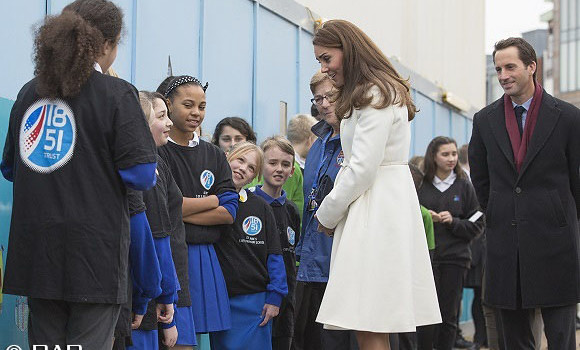 America's Cup1429 kate middleton1 sailing3991
Ben Ainslie Racing (BAR) and the 1851 Trust were today delighted to host a visit from The Duchess of Cambridge, the Trust's Royal Patron.

Portsmouth – Ben Ainslie Racing (BAR) and the 1851 Trust were today delighted to host a visit from The Duchess of Cambridge, the Trust’s Royal Patron. The Duchess received the inside track on the team’s progress and was privy to some of the secret technology that will not only give the team the competitive edge in the upcoming 35th America’s Cup, but also be adapted for the BAR Visitor Centre. This will be run by the 1851 Trust at BAR’s Portsmouth HQ and will show not only why STEM matters, but STEM in action.

The Duchess was introduced to BAR’s Design Team, who shared the innovative technology behind the America’s Cup racing, introduced some of the advanced technologies the team have in development and gave an update on the timeline and build schedule, between now and the final racing event in 2017.

Many of these technologies will be simplified and used within the BAR Visitor Centre which will be an engaging and interactive showcase for the sport, sustainability and innovation, to inspire and engage more young engineers. It will also support the STEM agenda – to focus on Science, Technology, Engineering and Mathematics in schools and provide resources to teachers within the core subjects.

Ben Ainslie commented, “It was fantastic to have The Duchess join us today. We’ve just returned to sailing on the Solent with our training boat, and it was a chance for us to be able to explain what we are up to on the technical side of the team’s challenge, and show the work that goes on behind the scenes. Everyone has been busy in the team, as well as making good progress on developing concepts for the BAR Visitor Centre and at the construction of the new headquarters in Portsmouth.”

The tour continued to Old Portsmouth and the construction site of the new headquarters and BAR Visitor Centre. To celebrate its launch last October, the 1851 Trust hosted an art project, coordinated by Southsea arts company Strong Island, bringing seventy two young people from six local schools together – St Jude’s Church of England School, Park Community School, Admiral Lord Nelson School, Charter Academy, Ryde School and Ryde Academy – to work on a painting of the Solent waters that link them all.

Local street artists James Waterfield and My Dog Sighs supported the project, painting the skyline from Portsmouth to Ryde, Isle of Wight, and worked with the students who filled the Solent with images of its rich maritime history – a history that Ben Ainslie Racing will maintain from their new home in Portsmouth.

The students showcased their artwork to The Duchess, including HMS Victory – Admiral Lord Nelson’s flagship – now just a few hundred metres away in the Historic Dockyard. The Duchess added her own touch to the mural, alongside Team Principal, Ben Ainslie, with a painting of the team’s AC45 – the dramatic, high-speed foiling ACWS boats that will race off Portsmouth and Southsea seafront in July 2015 and 2016.

The final stop was the Spinnaker Tower in Gunwharf Quays, which provided a great view from over 100m in the air of the BAR headquarters site and the construction work. The Duchess was briefed on the construction of the headquarters, the BAR Visitor Centre and shown the racecourse for the America’s Cup World Series event in July. Sir Keith Mills commented, “The team will move into their new Headquarters building in May, and we will look to a soft launch of the Visitor Centre in July, with it fully open in September in time for the new academic year. The America’s Cup World Series event will be here in July as well, and we are expecting over half a million visitors into the city – It’s going to be quite a year.”

Local students from Brune Park Community School, City College Southampton, Cowes Enterprise College, Springfield School, Mayfield School, Portsmouth Grammar School, Priory School, Riders Junior School and Westover Primary School were also invited to meet The Duchess. The 35 students are some of the first to experience the ideas and exhibits in development that will feature in the Visitor Centre, including a virtual 3D sailing experience.