America's Cup1424 dean barker76 franck cammas84 sailing3991
It's one of the most important times in an America's Cup campaign. The beginning. Get things right in the early stages, and it will... 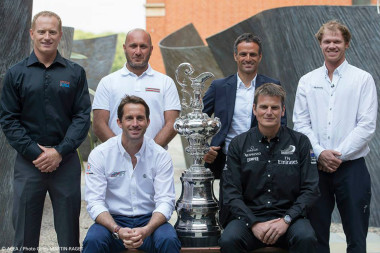 London – It’s one of the most important times in an America’s Cup campaign. The beginning. Get things right in the early stages, and it will be easier later.

That’s the position the sailors representing the six America’s Cup teams were taking on Tuesday during a press conference in London as they assessed how they’ve played the opening gambits in their campaigns for sailing’s oldest prize.

With the entry deadline just one month behind him, Franck Cammas is leading a new team for this America’s Cup, Team France, which hopes to unite the talent and expertise in the country to build a team capable of taking on the best in the world.

Speaking to a home audience, Ben Ainslie told the media his team would draw on a combination of youth and experience in building a British challenger.

“We’re putting together a predominantly British sailing team, a mix of experience with guys who have been there and won the Cup a few times as well as some younger, homegrown talent that is coming through. If we were going racing tomorrow, I would be steering the boat, but that might not be the same answer in a few years time.”

For Kiwi skipper Dean Barker, this America’s Cup is about finding that final one-percent his team needs to get over the hump, after coming agonizingly close to victory last time.

“Looking back, the thing that we quickly established is that our team has some fantastic attributes and it was only by the smallest amount that we were unable to go the extra step,” he said. “So having reviewed the team and after bringing in some new faces, some new talent, we’re in a much stronger place to kick off the new challenge.”

Artemis Racing too will feature a mixture of the new and the old, with Team Manager Iain Percy and helmsman Nathan Outteridge returning. But they’ll be bolstered by some new blood on both the sailing and design side.

“We’re trying to keep the key components of what we had at the end of the last campaign. Plus, we’ve been on a search to get some of the best designers and sailors to come and join us,” Outteridge said. “This year is about trying to build on top of where we ended up last year. We have the building blocks of a very good team.”

All of which makes the job of the defending champion that much harder.

“There’s no question this is the toughest line up I’ve ever faced going into an America’s Cup,” said Jimmy Spithill, the skipper of Oracle Team USA. “The talent and technology has spread out among the teams since the end of the last Cup, so it’s going to be a big challenge for us. But we’ve got a great team. It’s about getting the right people and we’ve got an exciting group. We’re really looking forward to facing these guys on the water.”

The first racing of the 35th America’s Cup will take place in 2015, in the America’s Cup World Series events, many of which will be hosted by the competing teams. Racing will be in AC45 wingsailed catamarans and according to Luna Rossa’s Max Sirena, the boats might be converted to foiling AC45s before the first event.

“We’ve asked ourselves the question over the past few weeks,” Sirena said. “The six of us here, the teams, are looking at the feasibility of making the AC45s foiling for next year. The intention is to move in that direction and we’re pushing hard to make it happen.”

Helping to make that push will be the new Commercial Commissioner, Harvey Schiller, who sees tremendous potential as the teams work together to build the event.

“We have what we need to make this a great America’s Cup,” he said. “Last time was transformative. We saw the speed, the athleticism and the groundbreaking television. Now, we are coming to a shared understanding of how the event needs to move forward. I’m looking forward to dirving that process.”

Teams were to have an initial meeting with the Commercial Commissioner later on Tuesday in London.

Melges 32 World Championship, in Newport to close the 2016 season

Louis Vuitton ACWS, the Trophy will return in New York