America's Cup1424 coppa america1249 Team New Zealand4
We are disappointed to see how Team New Zealand are characterizing the rule changes that reflect the collective will of the America’s Cup teams. 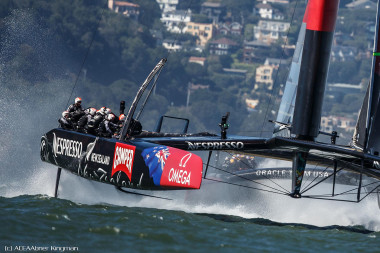 San Francisco – We are disappointed to see how Team New Zealand are characterizing the rule changes that reflect the collective will of the America’s Cup teams.

During discussions last month, all six teams, including Team new Zealand, agreed on the need to change to a smaller boat to reduce costs.

While Luna Rossa supported a less dramatic change, a majority of teams agreed on what has become the America’s Cup Class, a new rule written in consultation with all teams, with drafts of the rule sent to all teams for comment and feedback.

Each team that voted for this new America’s Cup Class made compromises and sacrifices to get this done for the betterment of the America’s Cup.

Taking these important decisions by a majority vote is something that was insisted upon by Luna Rossa and written into the rules of the event.

Regrettably, abiding by the results of the majority vote appears to be something neither they, nor Team New Zealand, are willing to do… unless they are part of the majority.

We hope that Team New Zealand can see a way forward, as we all have, and look forward to racing them in the Americas Cup World Series later this year.

America’s Cup, AC62 yacht will be a flyer
Add a comment