America’s Cup, AC62 yacht will be a flyer

ac622 America's Cup1424 coppa america1249 sailing3991
Fast, foiling, wing-sailed catamarans will race in the next America’s Cup as the new class rule for the AC62 yacht has been released. 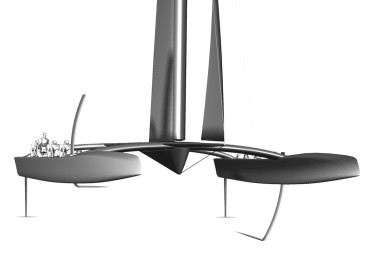 San Francisco – Fast, foiling, wing-sailed catamarans will race in the next America’s Cup as the new class rule for the AC62 yacht has been released.

The AC62 is 10 feet shorter than its predecessor, but is expected to be just as fast and challenging to race for the crews, and will produce the same heart-pounding action for spectators.

“This new boat is going to be significantly lighter and under much less load than what we raced last time, which makes for a big cost-saving when it comes to how it gets built,” said Oracle Team USA skipper Jimmy Spithill.

“At the same time, as designers, boat-builders, and sailors, we’re all starting to come to grips with how to get the most out of foiling, wing-sailed multihulls, so I think we’ll see similar, if not greater performance this time around.”

In the last America’s Cup, boat speeds approached 50 knots (96kph/58mph) at times as the hulls lifted out of the water on their foils, creating a spectacular sight for spectators, not to mention a challenge for the best sailors in the world.

This time the mandate was to get similar performance from a slightly smaller boat, but one that would be significantly less expensive to design, build and campaign. Initial calculations by the designers have the cost of the AC62 at about half that of the AC72.

Pete Melvin, a designer with Emirates Team New Zealand in the last America’s Cup, and his firm Morrelli and Melvin, were commissioned by Oracle Team USA (the Defender) and Team Australia (the Challenger of Record) to oversee the writing of the AC62 class rule.

“Writing this rule has been a very collaborative process, with designers associated with several teams helping out. We also had great assistance from Nick Nicholson, the Chief Measurer from the last America’s Cup,” Melvin said. “Since we circulated the draft rule, prospective teams have also given constructive comments that we’ve been able to take on board.”

The AC62s will be crewed by 8 sailors (down from 11) and teams aren’t permitted to begin sailing in their AC62s until approximately five months before racing starts in the America’s Cup Qualifiers in 2017.

Discovery Route, Spindrift 2: the movie of the record
Add a comment